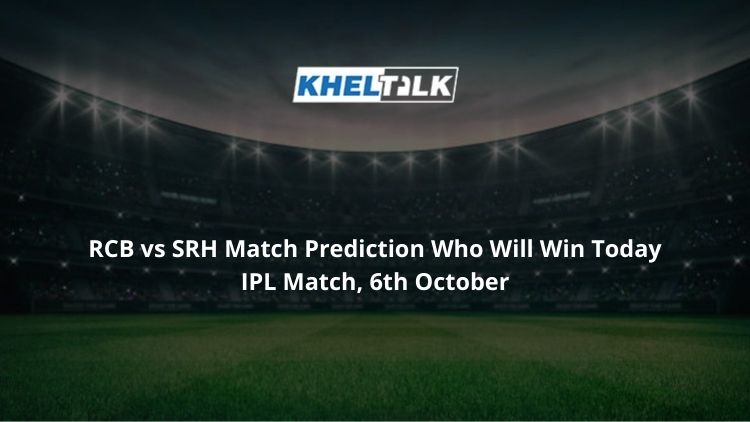 KhelTalk is the only destination that brings you the finest today’s match prediction that you can trust. We are here for RCB vs. SRH Today Match Prediction, 52nd Match, IPL 2021 Online Cricket Betting Tips, which will provide every user with a clear picture of which team and in what aspect they can place their bets.

Royal Challengers Bangalore have already qualified for playoffs after clinching victory in the last match against Punjab Kings but now they have a good chance to finish in the top 2 if they register victories in the last two matches by big margins. They are currently at the 3rd spot with games in hand, if they win both matches then they will be on level terms with both Delhi Capitals and Chennai Super Kings but then net run rate comes into play and so far Bangalore lacks behind in that race.

Royal Challengers Bangalore started this leg with 2 consecutive losses but Glenn Maxwell’s terrific form has played a crucial role in Bangalore’s resurgence. He has scored 3 consecutive fifties on difficult tracks of Sharjah and Dubai and now will be playing on the best batting wicket in Abu Dhabi.

Sunrisers Hyderabad is already preparing for next season and testing their youngsters. Sunrisers have only won one match in the last 8 matches which shows their poor struggle. They haven’t found their ideal XI yet and things are likely to be hard again against strong Royal Challengers Bangalore.

Hyderabad tested young Umar Malik and he turned out to be a surprise package as he was constantly bowling thunderbolts at 150 KMPH. Hyderabad has already lost against Royal Challengers Bangalore this season and will be now playing for pride and could potentially destroy Bangalore’s dream of qualifying in the top 2.

The weather in Abu Dhabi will be as usual and the temperature will be around 33 degrees with medium wind speed. In the last match, we saw heavy dew in the 2nd innings and we could expect the arrival of dew again in the 2nd-second innings.

So far pitch in Abu Dhabi has played best for batting among all three grounds in UAE. In the last match, we witnessed a run-fest and Rajasthan Royals easily chased mammoth 190 runs against mighty Chennai Super Kings. Dew plays a big part here in the 2nd innings and again it could be a deciding factor. If dew kicks in then no score is safe here and we could witness another run-fest. Captains will look to bowl first after winning the toss.

RCB vs SRH– Who will win the match, Today Match Prediction:

Glenn Maxwell has been Royal Challengers Bangalore’s best batsman in the 2nd leg and has single-handedly changed the fortunes of his team when they were in trouble after losing three consecutive matches.

Maxwell has scored 3 consecutive fifties and his last fifty on slow Sharjah was probably the best. Bangalore was in a middle muddle at one stage against Punjab but he showed up and smashed Punjab’s spinners all over the park. Maxwell has rejuvenated himself in IPL and could take Bangalore to their maiden title this season. He is our pick for best batsman from Royal Challengers Bangalore.

Jason Roy announced himself this season with a blistering 60 run knock against Rajasthan Royals in the first match but has struggled in the next two matches. Roy is a stroke player and likes to play on the rise which is hard on slow surfaces but Abu Dhabi will suit his playing style.

He can trust the bounce in this pitch and if Sunrisers bats in 2nd innings then he could take maximum advantage of the dew factor. Roy is a swashbuckling opener and can give you good returns from this match. He is our pick for best batsman from Sunrisers Hyderabad.

Rashid Khan has been the lone warrior for Sunrisers this season. He himself didn’t have the best of the season and only picked 15 wickets which is below his standards. Hyderabad has struggled to support Rashid Khan in middle overs and apart from Rashid, only one bowler has crossed single digit mark in the wickets column.

Rashid has a brilliant record against AB de Villiers and has dismissed him thrice in IPL and his strike rate is just 71. Rashid Khan is a consistent performer and can give you good returns from this match. He is our pick for best bowler from Sunrisers Hyderabad.

One bowler who was under tremendous pressure after the restart of IPL was Yuzvendra Chahal and he has lived up to expectations and sent a strong message to Indian selectors who dropped him from the World T20 squad. He has picked 10 wickets from 5 matches in UAE this season but the stage where he has been used by Kohli has been most impressive.

He has often broked the partnerships and always been economical which has helped RCB make comeback like in the Rajasthan game when they were 100 for one and Chahal turned around things and Rajasthan Royals only finished at 150 mark. Yuzvendra Chahal is our pick for best bowler from Royal Challengers Bangalore.