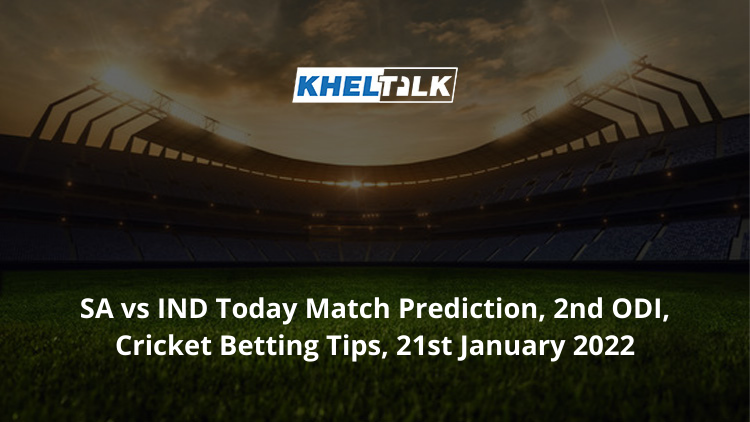 KhelTalk is the only destination that brings you the finest today’s match prediction that you can trust. We are here for SA vs IND, Today Match Prediction, 2nd ODI, Online Cricket Betting Tips, which will provide every user with a clear picture of which team and in what aspect they can place their bets.

South Africa will lock horns with India again in the second installment of the three-match ODI series as Boland Park in Paarl will host this fixture. The Proteas currently lead the series 1-0 as they won the first ODI against India by 31 Runs.

After electing to bat first South Africa posted a massive target of 296 runs on board. Bavuma and van der Dussen went on to pile up 204 runs for the second-highest 4th wicket partnership against India. Temba Bavuma scored 110 off 143 while van der Dussen amassed 129 Runs off 96 balls.

The bowlers did an excellent job to restrict India at 265 and kept a check on the flow of runs. Lungi Ngidi, Tabraiz Shamsi, and Andile Phehlukwayo bagged two scalps each and didn’t let any middle-order batsmen to get settled on the crease for a long duration.

With the winning momentum on their side after a superb win in the last match, South Africa will be aiming to seal this series in their favor by winning the 2nd ODI as well.

The Indian bowlers seemed to be losing their edge in the last game as Jasprit Bumrah was the only bowler who picked two wickets while Ashwin bagged a single scalp. The other bowlers couldn’t perform up to the mark as the partnership from Bavuma and van Der Dussen piled up the misery for India.

In return, Shikhar Dhawan remained the highest contributor for India amassing 79 runs while Virat Kohli scored a half-century. But as the top order returned to the pavilion, the whole Indian middle-order collapsed as wickets kept falling at regular intervals. Shardul Thakur put up a great effort scoring a half-century down the order but India failed to convert it into a win as he was playing alongside tailenders.

It will be really important for India to win this match to lift themselves up and come back strongly both in the batting as well as bowling departments. They need to rectify the mistakes of the last match and work upon what went wrong for them.

The pitch at this Paarl looks to be a neutral one. Both the batters and the bowlers have to be at their best on this wicket. As the game progresses, it is expected to become slower and start assisting the spinners as well.

SA vs IND, Who will win the match, Today Match Prediction

India is expected to win against South Africa.

South Africa seems to have found the right balance and with the winning momentum behind them after taking a lead in the series 1-0. Both sides will come out hard in this decider match. But it is expected that India will definitely bounce back in this contest to defeat South Africa.

India will be looking to lift themselves up and come back strongly both in the batting as well as bowling departments. But they need to be at their absolute best to save the series after a humiliating defeat in the last match.

van der Dussen has been rock solid for South Africa while batting in the last game. He piled up the misery for team India, batting alongside Temba Bavuma scoring 129 Runs off 96 balls. He will be a key batter for South Africa to take control of the Indian bowling. Dussen can be a safe pick as a player as he is in influential form with the bat and is expected to back his side in Paarl as well.

One cannot neglect the sheer amount of value Rahul brings to the Indian squad. The 29 -year old has been scoring runs for his side in every given format. He has grown exponentially in the ODI format over the last few years. Despite his dismissal, at 12 runs in the last match, he will make a strong comeback to lead from the front as the captain. If he remains on the crease for a longer duration he will certainly prove to be a threat for the Proteas bowlers.

He is a lethal bowler who could maintain speeds up to 140 km/hr range. Ngidi has already shown his ability in the longer format with exceptional bowling figures in the past. Leading the pace attack for South Africa he picked two major scalps in the last game as well. He is a sure-shot pick as a player that is expected to take at least one or two wickets in this contest.

His recent performance in the last match while bagging two scalps makes him a safe pick as a bowler. He is an aggressive quick bowler, who can swing the ball away from the right-handers even while hitting the pitch hard. Bumrah will play a crucial role in this contest by breaking the back of South Africa’s top-order batting lineup and restricting them to lower totals.