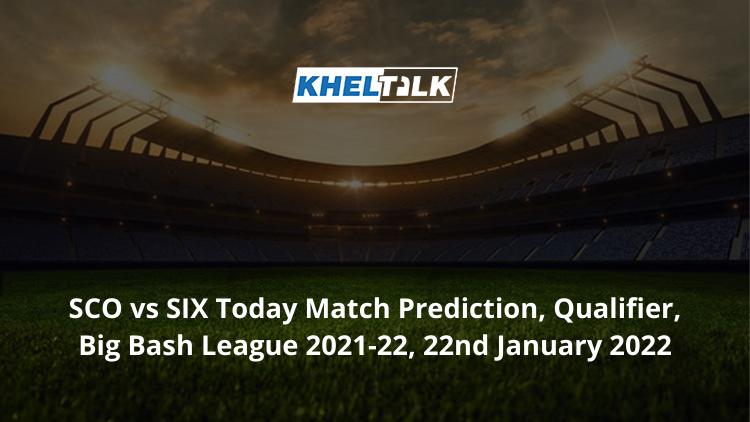 KhelTalk is the only destination that brings you the finest today’s match prediction that you can trust. We are here for SCO vs SIX, Today Match Prediction, Big Bash League 2021-22, Online Cricket Betting Tips, which will provide every user with a clear picture of which team and in what aspect they can place their bets.

Perth Scorchers will lock horns with Sydney Sixers in the Qualifier match of the Big Bash League 2022 as Docklands Stadium in Melbourne will host this fixture. Scorchers have been on top of the charts and performed consistently so far in the tournament. They have won 11 out of the 14 games in the league stages and winning this game will give them a ticket to the finals.

They faced Brisbane Heat in their last game and defeated the latter by 6 wickets. After electing to bat first Heat posted a target of 155 Runs in 20 overs. Behrendorff and Peter Hatzoglou took two scalps each in the first innings. In return, Kurtis Patterson and Josh Inglis provided a decent start to the Sixers innings while a 59 off 34 from Mitchell Marsh helped Sixers reach the given target by the end of 19 overs.

The Scorchers have been the most consistent team in the tournament so far and will be looking to bank upon the same in this contest as well. Carrying the momentum with them they have a clear chance to reach the BBL finals after defeating back-to-back defending champions, Sydney Sixers.

The Sixers have won the BBL title three times, two of which were in consecutive seasons. They finished the regular season at the 2nd spot on the table with just four losses from their 14 games They thrashed Brisbane Heat in their last game.

After being asked to bat first, Sixers posted a target of 178 Runs on board as Daniel Hughes remained the highest contributor scoring 59 off 45. Dan Christian also accounted for 32 Runs in the final overs. In return, the bowlers did a commendable job restricting the Heat batters and kept a check on the flow of runs. Hayden Kerr bagged three scalps while Ben Dwarshuis took two wickets.

This is will be a high-pressure game for the Sixers as they will make an effort to put their best foot forward to retain the champions title. Both the teams will be joining this fixture on the back of their individual wins. They certainly are a strong side with their captain returning to his natural form and a stunning display of bowling in the past outing.

The weather in Melbourne will be sunny throughout the day. The temperature will be around 24-32 degrees Celcius during the contest and there are no chances of rain.

The pitch in this Docklands Stadium has been batter friendly with the average score in T20 on this pitch being 160. From the bowling perspective, the bounce in the pitch will also be helpful for the pacers and spinners as well. Batting first and putting runs on the board will be an ideal decision.

SCO vs SIX, Who will win the match, Today Match Prediction

Perth Scorchers is expected to win against Sydney Sixers.

Scorchers have made the most number of appearances in the final, a total of six, four of which were consecutive, in the ten seasons of the Big Bash League. The Scorchers have thrashed the Sixers twice this season, by 10 runs and 5 wickets respectively. They are an immaculately balanced team that has all their bases covered, be it batting or bowling.

On the other hand, this is will be a high-pressure game for the Sixers as they will make an effort to put their best foot forward to retain the champions title. Both the teams will be joining this fixture on the back of their individual wins. They certainly are a strong side with their captain returning to his natural form and a stunning display of bowling in the past outing.

Munro has earned a reputation as one of Scorchers’ most reliable big hitters. He is currently the highest run-getter for Scorchers and has scored 377 Runs in 11 matches including a massive high score of 114* Runs in the last match against Strikers. While his unbeaten knock of 64* Runs in the match against the Thunder went in vain, it is pretty hard to look past Colin Munro as far as the Perh Scorchers are concerned. This will be Munro’s first game against the Sixers this season as he will be joining the League after an interval which will make the side a much stronger one.

In just two seasons with the Sixers, Josh Philippe has demonstrated an immense potential that has already earned him a place in the Australian Team. His high-scoring knock of 99* unbeaten in 66 balls against the Stars took his side to victory single-handedly as he timed the chase to perfection. Josh Philippe is currently the leading run-scorer for the Sixers with 424 Runs in 14 matches with a strike rate close to 145. His innings are studded with four half tons. With every match that he plays, Josh Philippe seems to be getting better. It is the keeper-batsman who has led the charge with the bat for his side in the current campaign.

The Australian has been exceptional in this edition of the BBL and is currently the leading wicket-taker in the tournament for Scorchers. So far he has picked 20 Wickets in 14 matches with an 8.15 Economy Rate. While he was overshadowed by other bowlers in the previous match against the Heat, he bagged one major scalp at the end of three overs, his potential cannot be neglected. He will be looking for a comeback in this fixture with his ability to bowl yorkers at will and enough variations to keep Sixers batsmen on their toes.

Lyon has developed into one of the most versatile bowling allrounders in Australian cricket. As wicket-taking off-break spinner he can also strike the ball cleanly with the bat and has contributed a few runs down the order as well. Returning to the squad after Ashes he brings depth in the bowling lineup of the Sixers. He dismissed the destructive Sam Heazlett in the last match against Heat and can surely pick one or two major scalps in this contest as well.