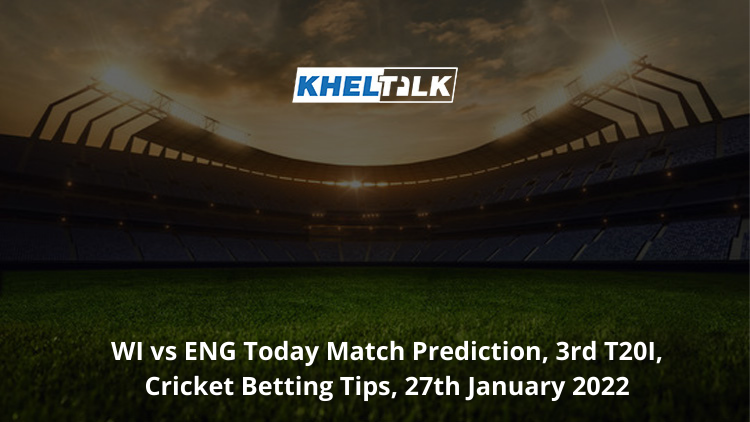 KhelTalk is the only destination that brings you the finest prediction for today’s match that you can trust. We are here for WI vs ENG, Today Match Prediction, 3rd T20I, Online Cricket Betting Tips, which will provide every user with a clear picture of which team and in what aspect they can place their bets.

After a thrilling end to the 2nd T20I, where England won by 1 run in the last over, both teams are set to play the 3rd T20I as Kensington Oval in Barbados will host this fixture. The series is currently leveled 1-1 where the hosts won the first T20I, while England emerged on the top in the 2nd T20I in a last over nail-biting match.

After being asked to bat first England jotted down a total of 171 Runs on board losing eight wickets. Fabian Allen and Jason Holder claimed two scalps each, out of which Allen proved to be quite expensive, giving away 50 runs in his four overs. Sheldon Cottrell, Akeal Hosein, Kieron Pollard, and Romario Shepherd also bagged a single scalp each.

In the chase, West Indies quickly came unstuck as both of their openers were dismissed by Reece Topley in the first couple of overs. Nicholas Pooran and Darren Bravo then put up a partnership of 47 Runs to back their side.

Akeal Hosein finished unbeaten on 44 from 16, doubling his previous best score in T20 cricket, but with his head in his hands after losing the game by a single run despite his efforts. Romario Shepherd had 44 off 28 at the other end, their unbroken 72-run stand setting a T20I record for the ninth wicket.

After being knocked over at a mere 103, England batters came out strong in the 2nd T20I setting a healthy target to defend. Their opening duo of Jason Roy and Tom Banton added 60 runs on the board where Roy hammered 45 off 31. Moeen Ali also gave England a platform with his 31 off 24. Chris Jordan again proved effective hammering 27 off 15 after being promoted to No. 7.

In return, Moeen claimed three wickets and Adil Rashid two as England’s spinners kept building the pressure on during the middle overs. Reece Topley claimed a wicket in his second delivery and then effected a superb run-out in his follow-through to leave West Indies 7/ 2.

England will be looking to end the tour of the West Indies on a high as they aim to complete a clean sweep of the T20 series after destroying the hosts in the second match to take a 2-1 lead into the final game.

The weather is expected to be mostly cloudy in Bridgetown during the course of this match while there are slight chances of rain playing spoilsport. The temperature will hover around 23-28 °C

The surface at the Kensington Oval is a balanced one, with decent assistance for both batters and bowlers on offer. It is expected to provide some initial help to the swing bowlers and the spinners might have to fight hard for wickets.

WI vs ENG, 3rd T20I, Who will win the match, Today Match Prediction

England is expected to win this match against West Indies.

England will be high on confidence after their thumping win in the last match by a minute margin. They put on an all-around performance and looked at their very best. Currently, England looks a bit more well-settled out of the two.

For West Indies, the defeat in the final over must have rung the bells. The Caribbeans will have to put their best foot forward to come out victorious in the third encounter.

Though Pooran did not get much time to showcase his abilities in the first T20I, he took the Caribbean side to the winning platform with his unbeaten 27. He again backed his side after two early dismissals in the second T20I and hammered 24 off 22. He is a dominant player of the shorter format and will come out as an efficient batter top the order to back his side again in the third T20I.

Roy slammed an astonishing century off just 36 balls in the warm-up game and showed he is ready to go all in the series proper. He is anyways an aggressive batter and will be looking to provide a quickfire start to the visitors. With the absence of Jos Buttler at the top of the order, the burden will be on Roy to lead the way for England. So far he has amassed 51 Runs in 2 games.

Holder is the key bowler for West Indies having bagged 6 wickets in 2 games with an impressive 4.17 economy rate. He is a reliable batsman down the order and his steady medium-pace has already procured good results for him on the Bridgetown surface. He is a safe pick as a bowler here considering the good results his spell has produced so far in the series.

Adil Rashid is rated pretty highly in England and his 77 wickets in 70 T20Is are testimony to that. Eoin Morgan trusts the leg-spinner a lot and certainly, Rashid will test the West Indies batters with his variations. Before the start of the series, the pitch was likely to help the spinners less but Rashid proved that wrong after bagging one scalp in the first match and two in the last match. He is expected to fare well again with his leg break bowling in this contest.