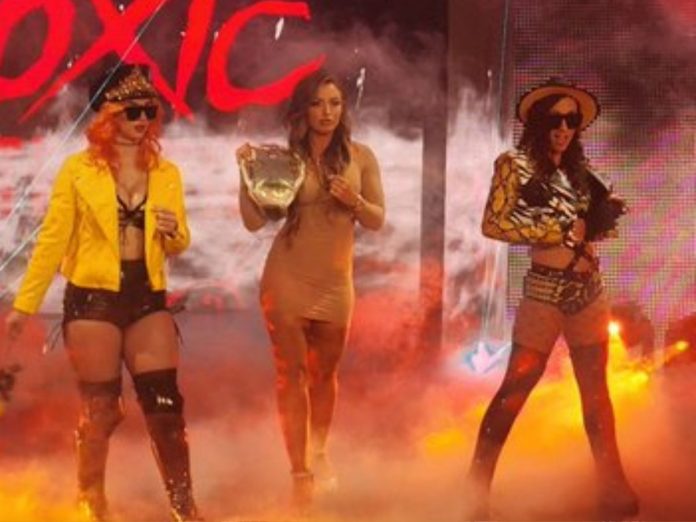 The show features several highlights, highlighting the fight between JD McDonagh and Tyler Bate for a title shot at the NXT Championship and the second match between Axiom and Nathan Frazer in their particular best-of-three series.

The show opens with a summary of the last episode of NXT 2.0, which celebrated the first anniversary of the multicolored brand, and ended with Solo Sikoa being crowned the new NXT North American Champion.

We see a previously recorded segment backstage. Shawn Michaels has requested the presence of Solo Sikoa and Carmelo Hayes. Once both meet in front of the WWE Hall of Famer, he asks the Samoan to hand over his North American Championship. Michaels points out that he should not have participated in last week’s title match, since he is now part of the SmackDown roster.

Shawn explains that unfortunately, the rules are the rules. Sikoa hands over the championship and leaves, but not before receiving the best wishes from Michaels.

Carmelo rubs his hands as he thanks Michaels for making the right decision, but Michaels tells him that he will only get the title back if he wins it again. To do this he will have to compete against four other rivals in a ladder match at NXT Halloween Havoc, an event that will take place in six weeks. As compensation for the events of the past week, Shawn informs him that he is already automatically qualified for the fight. For their part, the rest of the participants will have to earn their place in several qualifying fights.

Just like in their first fight, Axiom and Frazer demonstrate their athletic abilities from the get-go. After a series of exchanges, the British catch his rival in a headlock, taking him to the canvas, until Axiom reverses the situation. The masked man manages to execute a Suplex with a bridge, with which he seeks the count of three, but the British stop the count in two.

Axiom falls out of the ring after receiving a hurricanrana from his rival, who prepares to jump on him. However, the Spaniard manages to stop him with a punch. Axiom then climbs to the top rope and jumps at his opponent with a crossbody springboard, but Nathan stops him in midair with a dropkick, turning the tables in his favor.

Frazer dominates Axiom during the commercial break. Both fighters exchange attacks, with the Spaniard ultimately jumping off the string to execute a flashy forearm. The fight then goes into a phase of complete madness. Frazer attacks with an enziguri. Axiom returns the favor with a Pele Kick, but his rival responds with a superkick.

The fight moves to the corner, where Axiom manages to launch his rival with a suplex. The masked man tries to finish the fight, but the British refuse to lose. Axiom’s sleeper hold, which Frazer quickly breaks free of. The Spaniard gets back on the corner. Nathan quickly follows him and executes a tremendous superplex, followed by a Phoenix Splash, to put an end to the second fight between the two rivals.

A video of Alba Fyre is shown, who acknowledges that Mandy Rose has set a great record, defeating opponent after opponent. However, she points out that last week she could feel the fear of the champion, threatening to take the title from her and bring down her empire.

For their part, Mandy and her companions from Toxic Attraction are confident, ensuring that they are at a higher level than the rest of the NXT women’s division. They then march to the ring.

Damon Kemp reveals how he pulled the strings to destroy Diamond Mine from within. The fighter is full after costing The Creed Brothers the victory last week. As for these, Kemp assures that he can defeat any of them, as long as they come one at a time.

Ivy Nile is furious at Kemp’s actions. Tatum Paxley tries to reassure her as they now have a match. Ivy assures her that she is focused and they both march toward the ring.

Gigi and Tatum begin the fight. After a series of exchanges, Tatum seeks relief but receives a clothesline from Dolin. She takes over from Jacy, and between the two of them, they punish Paxley. Tatum finally manages to reach his partner, who enters the ring destroying his rivals, on whom he executes several suplexes.

In the final moments of the fight, Nile manages to hit Jayne with a big kick, followed by a suplex, but Gigi manages to avoid the subsequent count of three. At that moment, Paxley enters the ring, but the heels manage to expel her from it, taking advantage of her numerical superiority to start an offensive against the off-kilter Nile, who finally ends up receiving the count of three after receiving the High / Low from her rivals.