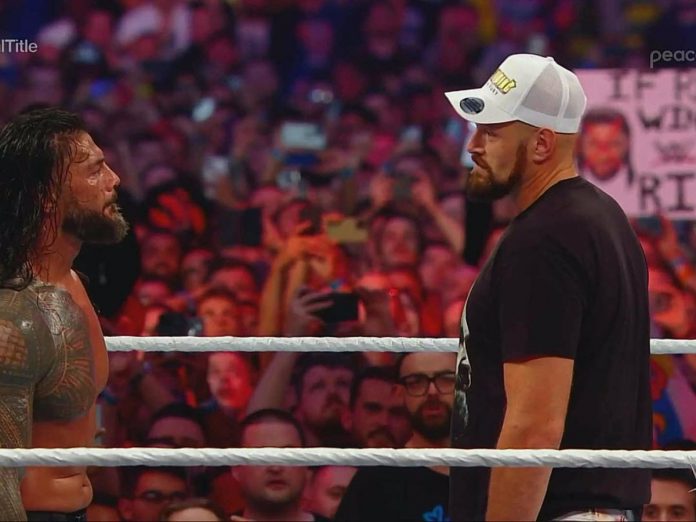 WWE News: Roman Reigns was successful in his last defense against Drew McIntyre in WWE Clash at The Castle, a match marked by the intervention of Solo Sikoa and Theory, who tried to redeem the Money in The Bank briefcase without success due to the participation of Tyson Fury.

After the fight, The Tribal Chief received a visit in the ring from the boxer, who showed him respect by offering him his hand. Reigns accepted and left with Sikoa.

This interaction could translate into a fight in the future. Dave Meltzer, a journalist from Wrestling Observer, during one of the interventions of his last radio program, has assured that WWE intends to face Roman Reigns and Tyson Fury at some point.

Everything will depend on Fury’s disposition, something that Triple H has addressed in recent interviews, where he has assured that the boxer has the potential to do something special in WWE.

Roman Reigns will defend the WWE Unified Championship against Logan Paul at Crown Jewel, an event that will take place on November 5 from the Mohammed Abdu Arena in Riyadh, Saudi Arabia. Triple H praised the work ethic of some media personalities who have been interested in fighting in WWE in recent years, such as Logan Paul or Bad Bunny. Tyson Fury is no exception, so his fight against Roman Reigns will probably end up happening.

Having Roman Reigns as WWE Universal Champion today is insurance, although it also has its drawbacks, such as his low participation in weekly shows or the difficulty in finding a suitable rival. It is a problem that WWE has experienced in the last year and that will possibly last until WrestleMania 39.

Also Read: WWE Extreme Rules 2022: 5 Superstars Who Will Feature For The First Time In This PPV