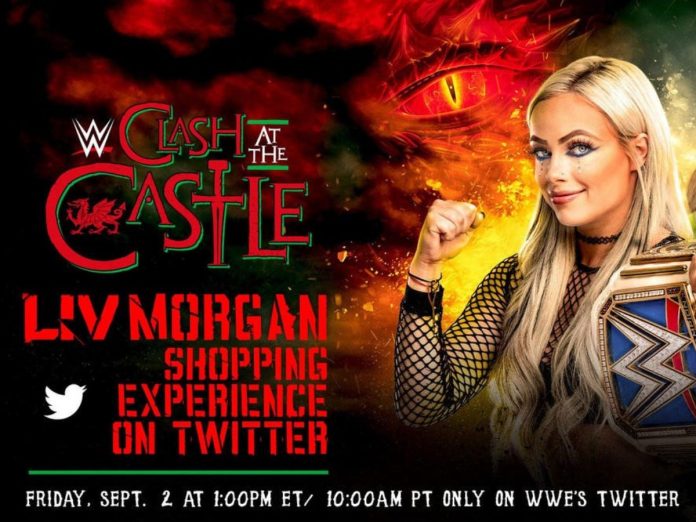 WWE continues to promote its next big PLE, Clash at The Castle, which will take place next Saturday, September 3 from the Principality Stadium in Cardiff, Wales. In addition to the previously announced promotional events, the company recently added a live Twitter shopping experience celebration featuring Sarah Schreiber and Liv Morgan.

This is the first time that the company has carried out an experience of this type, which will take place on the main WWE Twitter account next Friday, September 2 from the WWE Clash at the Castle Superstore in the St. David’s shopping center Dewi Sant in Cardiff, Wales.

Host Sarah Schreiber will headline the event, accompanied by current SmackDown Women’s Champion Liv Morgan. During the event, a selection of WWE Euroshop and Clash at the Castle merchandise will be highlighted. And it can be purchased in real-time within the live broadcast by tapping the purchase banner or clicking the shop tab at the bottom of the page screen.

Merchandise featured during the live broadcast will include official Clash at the Castle merchandise, superstar t-shirts, champion titles, and much more, the company said in its official statement. On the other hand, WWE has indicated that it will be the first sports channel in North America to organize a live shopping experience on Twitter.

Meanwhile, Liv Morgan continues to prepare for her match against Shayna Baszler. The SmackDown Women’s Champion will defend her title against the “Queen of Spades” at WWE Clash at The Castle. The event will be broadcast live from the Principality Stadium in Cardiff, Wales, this coming Saturday, September 3, and can be seen on Peacock in the United States and on WWE Network in the rest of the world.

Also Read: Why John Cena is the greatest of all time? His legacy & stats in WWE; All you need to know