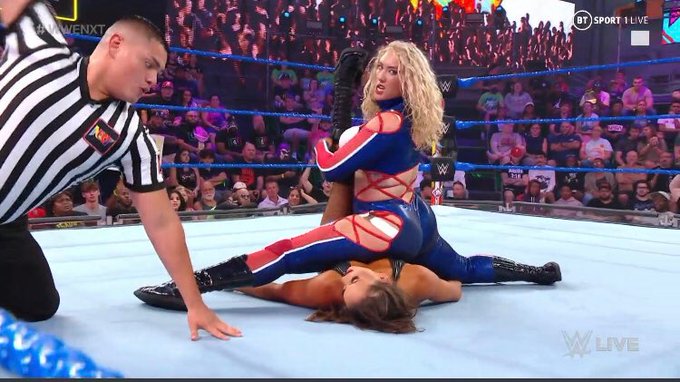 WWE NXT Result today: Cora Jade is not happy with the return of Zoey Stark. The rude felt on the moon after betraying Roxanne Pérez, but Starks returned to NXT after several months and won the campaign to become a challenger for the NXT Women’s Championship. Now Jade wants to make it clear that she is the best one week before Starks faces Mandy Rose for the title at NXT Heatwave. The NXT action is broadcast from the Capitol Wrestling Center, in Orlando, Florida.

In another ladies’ meeting, Nikkita Lyons will face Kiana James, who wanted to embarrass her by wanting to show that she does not meet the standards of female beauty.

In addition, we will see Wes Lee against Trick Williams in a six round fight, in which the winner will be the first to get two back touches or submissions.

The mafia war in NXT could be close to ending, since Santos Escobar is back, and after retaking control of Legacy of the Ghost and costing Tony D’Angelo and Channing Lorenzo their chance for the NXT Couples Championship, they will hold a meeting of family leaders to reach a final agreement.

With a Spinning Kick, Nikkita finished this off.

Good presentation of Kiana James, despite the defeat.

It started out well, but faded.

Kiana James ruined the celebration by attacking Nikkita from behind.

Roderick Strong arrived and questioned The Creed Brothers for talking to Apollo, explaining that his absence a week ago was part of a test and the champions passed it.

Apollo got into the conversation, and argued with the leader of Diamond Mine and it seems that we will have a challenge between the two.

The rules of the following fight between Wes Lee and Trick Williams:

After the fifth round, Williams was unable to get up and lost by KO.

We did not know what to expect and it was an entertaining fight.

Carmelo Hayes appeared in the ring and referred to the events of last week and said that Nathan Frazer, like everyone else, fell, and the music for him played.

Also Read: Multiple-NXT stars are likely to be part of the main roster in WWE under Triple H’s guidance

However, the one who appeared from behind was Giovanni Vinci, who said that Nathan Frazer stole his place, but that next week they can have a match and it will turn him from “A Champion” to “A Guy”.

Hayes accepted the challenge, but they did not want to wait much longer and decided to attack each other, although nothing was done and some referees came to separate them.

We saw a promotional video of the rivalry between Bron Breakker and JD McDonagh, who will face each other next week in NXT Heatwave.

With a contralona, ​​Arianna Grace took the victory.

Only Sikoa was informed that he will be out of action for 4-6 weeks with a posterior cruciate ligament injury. Cameron Grimes went to check on him.

4.Apollo Crews vs. Roderick Strong
Both began with the struggle and in a matter of seconds took the action to the level of the canvas. Strong, who decided to appear on his account, was exchanging good offenses with Apollo, but there were few counts and there was no clear dominator of this match, until Strong turned things in his favor with a Backbreaker. Apollo wanted to fight back, but was dropped instead and the dominance went to Diamond Mine.

The disrespect to our champion is disgusting.

We won’t forget this. https://t.co/pbeXUEgAPi

Roderick Strong called out the rest of Diamond Mine for not showing up and Julius asked how he felt. Roderick said that the problem was Apollo and that he is not part of the group and left upset.

With a Uranage, Apollo took the win.

Santos Escobar and Tony D’Angelo attended their last meeting, with the former trying to shake his hand. Tony told him that it cost him the title, but Escobar told him that he and his henchmen put him in the hospital, with the Mexican telling him that last week was a little revenge.

After baring his skin in the sun, Escobar proposed a deal to D’Angelo: one last match for NXT Heatwave. If D’Angelo wins, Escobar leaves NXT and stays with Legacy; if the latter wins, Legacy of the Ghost will be free from the D’Angelo Family.

D’Angelo agreed, but proposed that it be a street fight and Escobar accepted.

Prince covered Blade after a joint maneuver and achieved the count of three.

Lash Legend appeared after the match to attack Fallon Henley.

Before Cameron Grimes left the scene, he was approached by Joe Gacy, who was still trying to recruit him.

For @WesLee_WWE, the Rounds Match was just another curveball that he was ready to overcome.#WWENXT pic.twitter.com/0bbkKMOObB

A knee and count of three for Cora Jade.

Roxane Perez didn’t seem to be done with Cora Jade and went after her. Meanwhile, Zoey Stark took down the NXT Champion and with the title on top, concluded the program.