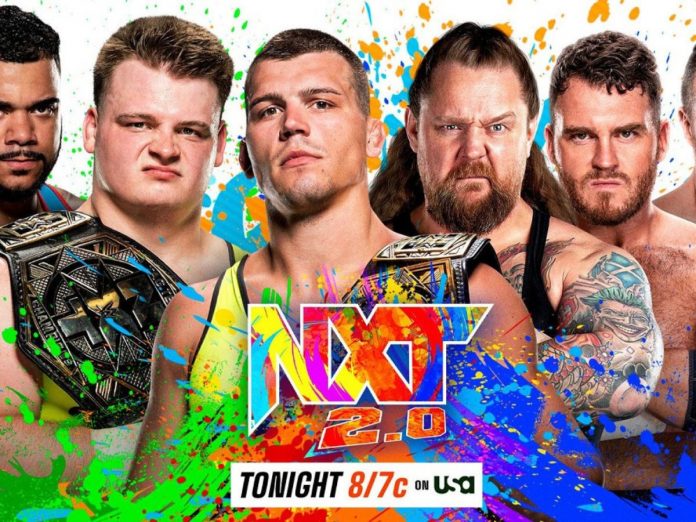 The show has several points of interest, highlighting the fight between Diamond Mine against Gallus, a fight between Apollo Crews and Grayson Waller, or the fight between Josh Briggs, Brooks Jensen, and Fallon Henley against the team formed by Pretty Deadly and Lash Legend.

In addition, the new NXT Women’s Tag Team Champions, Katana Chance and Kayden Carter will square off in a tag team match against Ivy Nile and Tatum Pixley.

Waller makes his entrance to a loud boo from the audience. He grabs the microphone, but before he can say a word, Apollo Crews’ entrance theme plays, and he heads to the ring to the applause of the fans. During the first phase of the fight, both rivals exchange holds and blocks.

A clothesline knocks Grayson down, giving his opponent the advantage, who starts his offense, including a big fist, followed by an Irish whip and ending with a back body drop. Waller tries to recover, but only manages to receive a dropkick signed by Apollo, who mocks his opponent.

We continue with the Nigerian keeping his opponent on his shoulder for a few seconds before throwing him to the ground via a vertical suplex. Crews jump towards the apron to later launch himself on his rival with a springboard senton, which leaves the referee’s subsequent count in two.

Grayson responds with an eye attack on Apollo, who leaves the ring. Once outside, he is tended to by medical officers as we arrive at the first commercial break of the evening. We see Waller dominating the fight during the publicity.

Back, the heel keeps Apollo imprisoned in a headlock. Although he finally breaks free, Grayson catches him again with a sleeper hold as the Nigerian tries to execute a senton slingshot. Waller repeatedly hits his rival’s head while he remains on the canvas.

Apollo responds with an enzuigiri, followed by another kick that sends him into the corner. Crews continue to apply various clotheslines that weaken his rival. Big splash, followed by a Blockbuster, and Crews look for the count of three, but it stays at two. However, when Apollo tries to finish off his rival once and for all, he slips away, leaving the ring to re-enter and apply his characteristic Rolling Thunder Stunner.

A video of Meiko Satomura is shown. “The Final Boss” looks back on her career from her debut to her arrival in WWE NXT UK, where she has managed to become a tremendously solid champion.

The members of Diamond Mine try to cheer themselves up before their match against Gallus tonight. Roderick Strong tries to participate in the conspiracy of his companions, but The Creed Brothers and Damon Kemp still do not trust him, which leads them to argue once more. Just then Ivy Nile and Tatum Paxley appear, who advise them to stick together.

Finn Bálor appears by surprise in the locker room, where he meets Bron Breakker. The Irishman reminds him who he is and what he has been in NXT, especially carrying the title that Bron now carries. Bálor wishes him luck heading into his championship unification match at NXT Worlds Collide but advises him not to underestimate his rival. Before leaving, they both shake hands as a sign of respect.

Carter and Chance look for a quick victory over Ivy in the early stages of the match, but she doesn’t fall to her rivals. Pixley springs into action as Toxic Attraction closely follows the match.

Tatum dominates Kayden, but she manages to turn the situation around, applying a dropkick before taking over from her partner. Turn for Katana. Pixley catches Chance and looks to powerbomb her, but the champion breaks free. A double clothesline leaves them lying on the canvas.

Also Read: WWE Worlds Collide 2022 Date & Location: How to watch Live streaming in India, When & Where to watch on 04th September 2022