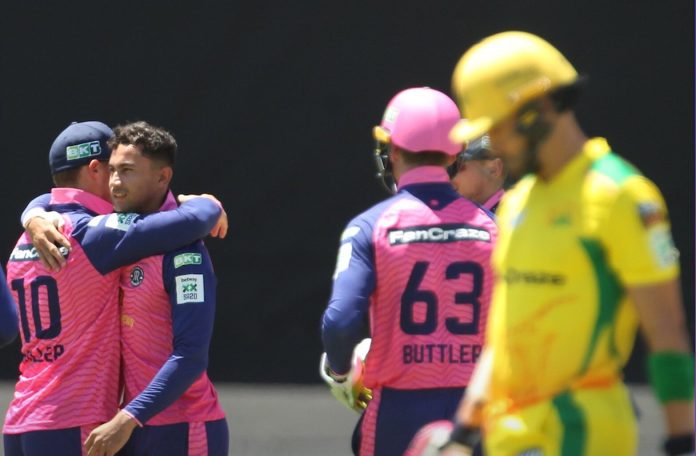 In the fourth SA20 encounter, Joburg Super Kings skipper Faf du Plessis chose to bat first against Paarl Royals after winning the toss. The venue for this game is Boland Park in Paarl.

In the fourth game of SA20 2023, Paarl Royals defeated Joburg Super Kings for just 81 runs thanks to Bjorn Fortuin’s outstanding bowling during the powerplay. With 2.5 overs remaining, Joburg has declared out thanks to at least 1 wicket from each of the bowlers for Paarl Royals.

Janneman Malan, the JSK opener, was once again underwhelmed and was out for just 2 runs against Forutin in the third over. Fortuin continued by dismissing Reeza Hendricks (4), the second opener, in the same over.

After sitting out the first game, Ngidi got off to a strong start by dismissing Joburg captain Faf du Plessis (2) in the fourth over, while Fortuin struck again during the powerplay by taking off Lewis Gregory (2) in the fifth over.

The CSK top performer of the previous match, Donovan Ferreira struggled and was bowled out by Evan Jones in the seventh over. No batter was able to reach the 20-run score.