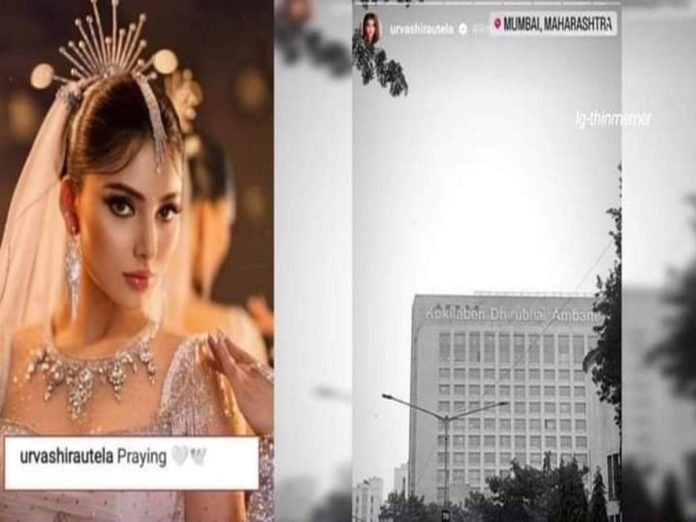 Rishabh Pant, an Indian wicket-keeper batsman, met with a serious car accident last week when his car slammed into a divider at a high rate of speed in Roorkee. Pant was airlifted from Dehradun’s Max Hospital to Mumbai’s Kokilaben Dhirubhai Ambani Hospital and Medical Research Institute on January 4.

Urvashi Rautela uploaded a picture of the hospital where Pant has been shifted on her Instagram Stories on Thursday, January 5. The actress has received criticism for Pant a lot since her social media argument with the Indian batsman in August of last year.

He was rumored to be dating the actor, although they had already exchanged cryptic postings in which they bashed one another. Thursday, Urvashi posted a black and white image of the hospital building on her Instagram Stories. She appeared to be close to the medical hospital. The post just included the name of the city and no caption.

Pant’s car accident and his injuries

For the unversed, Rishabh was involved in a car accident on December 30, just before the new year. On the Narsan border of Roorkee, close to Hammadpur Jhal, he was traveling back from Delhi to Roorkee when his car struck the barrier. When the collision occurred on the Delhi-Dehradun highway, Rishabh was the only person in the car. He has injuries on his forehead, back, and leg. After the collision, his car suffered severe burns.

After the news of his accident surfaced, Urvashi posted a picture from one of her photo shoots and captioned it, “Praying #love #UrvashiRautela #UR1,” along with a heart and a pigeon emoji. She didn’t mention the name of the person she was praying for. Besides this, later she also tweeted, “I pray for you & your family’s wellbeing.”