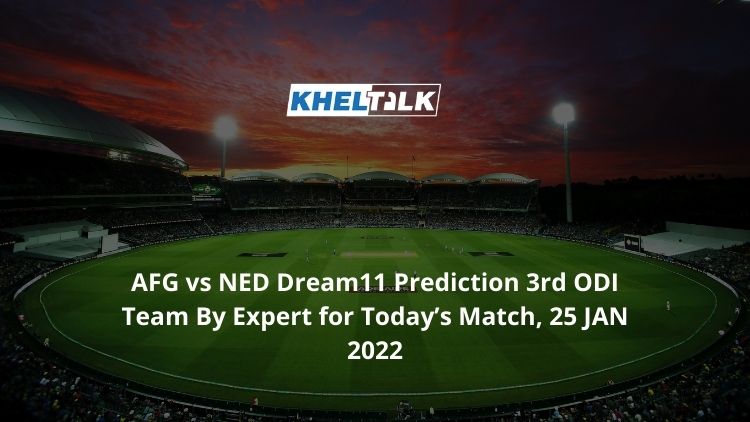 Afghanistan and Netherlands will lock horns in the third and final ODI on Tuesday. Afghanistan has already won the series by winning the first two matches convincingly.

A couple of 50-plus stands by the middle order helped Afghanistan to reach 222 in their first ODI. The collective effort from the bowlers then helped the team to win the match by 36 runs.

In the second outing, Afghanistan piggybacked on Gurbaz’s ton and got to 237. Once again, the bowlers proved too good for the Netherlands as Afghanistan won the second match by 48 runs and took an unassailable lead in the series.

Going by what we have seen in the first two ODIs, the batting has been easy and the spinners have dominated too. Afghanistan were able to break the record by winning the match while batting first. Once again, 220-230 will be a good score here.

According to the forecast, the temperature will be around 33 degrees Celcius and the climate is likely to be sunny throughout. There is almost zero percent chance for rain.

The team is likely to make a few changes here as they have already won the series. Rashid Khan and Mujeeb ur Rahman could be rested in order to manage their workload.

Led by Pieter Seelaar, the team does have a good composition. However, the team couldn’t get going and their death bowling has been a big concern at the moment. In the last match, they leaked more than 60 runs in the last five.

Hashmatullah Shahidi was the player of the match in the first match for his 73. The skipper is currently the leading run-scorer of the series with 127 runs from his two outings. He has five fours and four sixes to his name.

Rahmanullah Gurbaz was outstanding in the last contest. The keeper smashed 103 runs and overall, he has 116 runs in the series. He also has a couple of catches to his name so far.

Mujeeb Ur Rahman has been excellent with the ball. Instead of playing the second fiddle to Rashid Khan, the teenager had taken the lead role and has picked up six wickets so far. He has the best of 4/32 in the series.

Rashid Khan, of course, has been excellent with his line and length. The spinner has four wickets with the best of 3 for 31. He also has chipped in to score 19 runs in the series.

Scott Edwards has been the lone warrior for the men in orange in this series. The keeper has scored 154 runs with the best of 86. He has scored two fifties in the series so far and has two stumpings to his name.

Who Will Win Today Between AFG vs NED Dream11 Prediction, Today’s match?

According to Kheltalk’s astrology AFG vs NED  Dream11 match Prediction, Afghanistan will begin this contest as favorites. Afghanistan has dominated the series so far and they are likely to end this one on a high note.

According to Kheltalk’s AFG vs NED Dream11 toss prediction, Afghanistan will win the toss and will look to bat first at this venue. Both their wins in the series came while batting first.