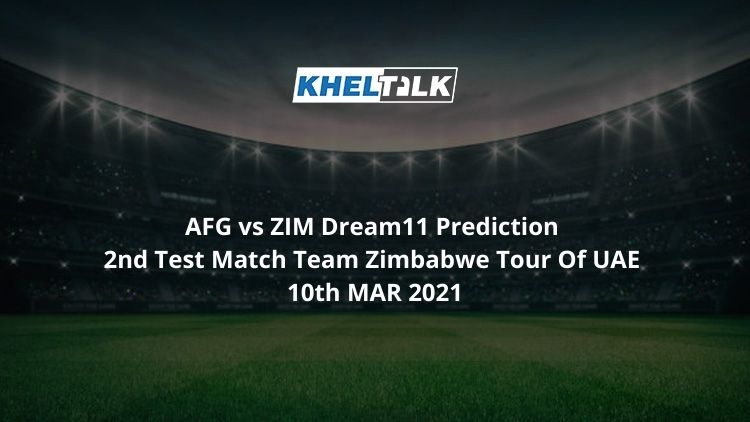 Here are the stats for the teams AFG vs ZIM:-

The wicket is a haven for the batsmen and is also not the worst ground for the seamers. Six double centuries have been scored in the eight matches.

Very, very hot. Not a cloud in the sky. An ice pack is essential.

We suggest you go for batsmen and at least two spinners to your side as they would surely help earn points.

Zimbabwe thumped them to lead in the series and Rashid Khan’s absence didn’t really make any difference. They lacked quality with both bat and ball.

Zimbabwe won’t take it lightly after winning the first test. Afghans will be looking forward to leveling the series. No changes are expected.

Here are a few predictions for the captain pick for the AFG vs ZIM clash.

I Zardan was the highest run-getter for the side in the last game for Afghanistan. Looks like, he is in good touch and will surely make a difference in the upcoming game.

Sean Williams was awarded MoM in the last game as he contributed well with the bat as well as with the ball.

Rashid Khan has introduced him well at the international podium. So far, he has 23 wickets at an impressive average of 21 from four tests and can be a handy batsman as they have test fifty.

B Muzarabai chipped six wickets in the 1st test. He looked lethal with the ball and got changes in his variation which made it difficult for Afghans to score runs.

Amir Hamza took six wickets for Afghans at an economy of 3.18 and was the only bowler who kept troubling Zimbabwe. Hamza has bagged 80 wickets in the last 14 games First-Class games at an average of 21.05

V Nyauchi is the second bowler who bagged six wickets in the first test alongside Muzarabani.

Here is the Dream 11 Team prediction for AFG vs ZIM. We are going with players who are currently in good form and can win the match with ease.

Head To Head Team For Afghanistan vs Zimbabwe

Who Will Win Today Between AFG vs ZIM Dream11 Prediction, 1st match?

According to Kheltalk’s astrology AFG vs ZIM Dream11 match Prediction, AGH will win the match.

According to Kheltalk’s AFG vs ZIM Dream11 toss prediction, AFG will win the toss and will bat first.