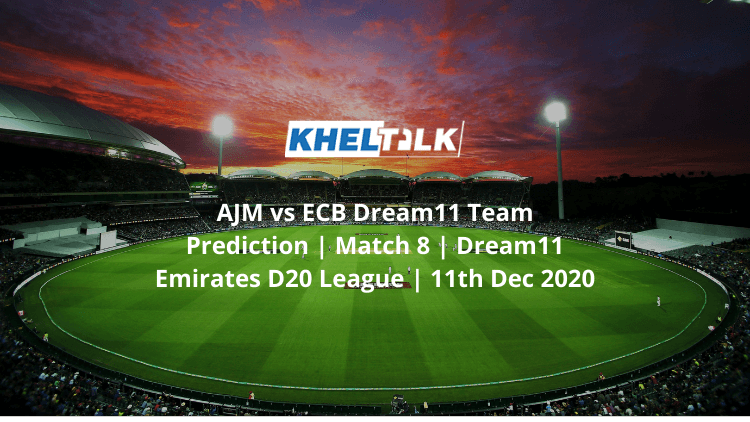 Ajman Alubond will take on ECB Blues in the 8th match of the Emirates D20 League. ECB Blues are currently unbeaten in the tournament with back to back wins and are at the top of the table, thanks to their net run-rate. On the other hand, Ajman Alubond has won one and lost one from their 2 matches. Their loss came against Sharjah Bukhatir XI, where the latter convincingly won the match by 6 wickets. Ajman will be looking to bounce back and will start this match as the underdogs. Let’s go through our Dream11 Team Prediction in the upcoming game of Emirates D20 League between AJB and ECB.

The pitch has something for both the batsmen and the bowlers. So far in the tournament, the batsmen have struggled earlier in the innings but as the ball gets older, they were able to score quick runs.

Rameez Shahzad has been the stand-out performer in the tournament so far. He has 111 runs from his 2 matches with the best of 73 and also has picked up three wickets so far.

Nasir Aziz can contribute both with bat and ball. While he didn’t get much opportunity to bat in the tournament, he has done well with the ball to pick up two wickets.

Karthik Meiyappan is one of the consistent performers with the ball in the tournament so far. He has picked up 4 wickets with the best of 3 for 17 from his 2 matches.

AJM vs ECB Team11 Team Prediction: Who will win the match

Going by the performances in the tournament so far, ECB Blues will begin this contest as the favorites. Our Dream11 Team Prediction experts feel that ECB Blues have a more balanced and experienced squad comprising some big names that will help them in getting off the mark with a win.