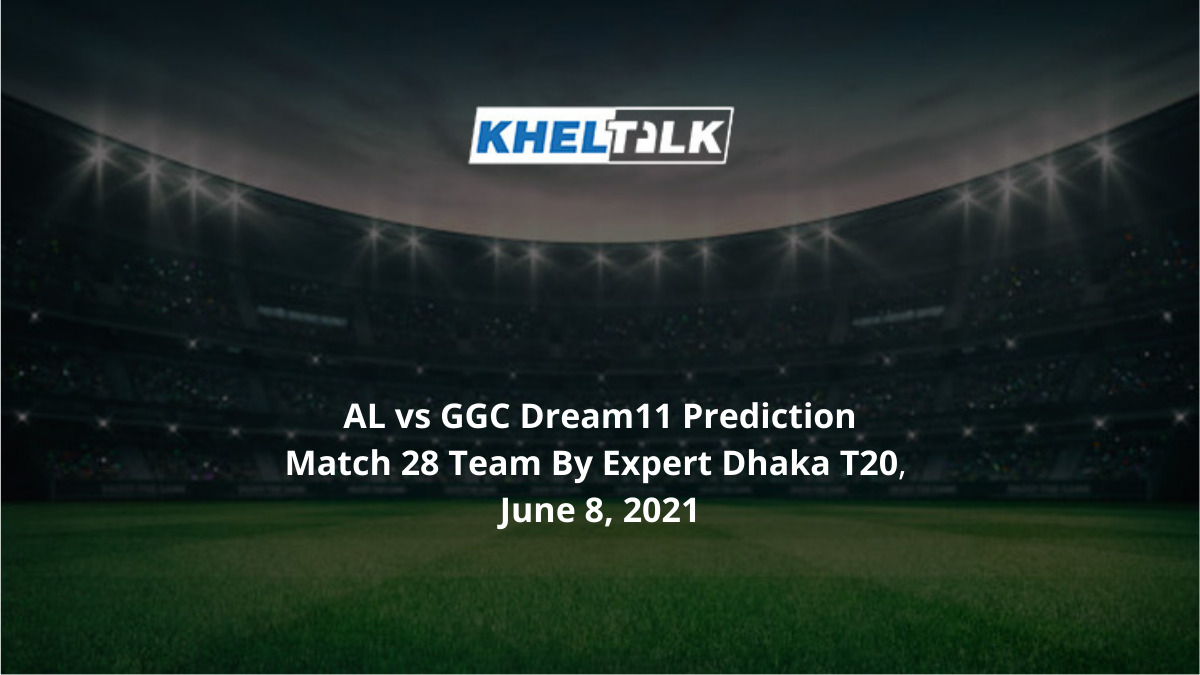 According to AL vs GGC Dream11 Prediction for Today’s Match Fantasy Cricket. Abahani Limited will take on Gazi Group Cricketers in Match 28 of the Dhaka T20 on Tuesday, June 8, 2021, at the Shere Bangla National Stadium, Mirpur, Dhaka. Keep reading to find out about the Match 28 AL vs GGC Dream11 team today.

The former champions Abahani Limited will take on Gazi Group Cricketers here. They are the favourites to win the tournament at the moment and they have managed to win three matches in a row before going down in their last match. With that loss, they move down to the 3rd spot in the points table.

On the other hand, Gazi Group Cricketers are at the bottom half of the table and will be keen to move up the points table. Since this is just the early stage of the tournament, a win here can push them towards the middle spot in the table.

This is more of a neutral venue where both batters and the bowlers will have a good outing. The average first innings total at this venue is 153 at the moment and interestingly, the team batting first have won more matches here.

The rain is on cards on Tuesday in Dhaka. There is a high chance that this match might get washed off because of the same. There is a 60 per cent chance for rain and it will be interesting to see how the teams go here.

Though GGC team is at the bottom end of the table, the team has a good line-up and the players can be trusted for good performance. On the other hand, team AL are the better team here but they depend mostly on one or two players.

While the team is doing well on the batting, they need to work more on their bowling. Thus, we might see a few changes in the bowling department here. The team is likely to prefer more number of all-rounders here.

Starting from the skipper Mahmudullah Riyad to Mahedi Hasan, the team is in good form at the moment and are likely to bounce back here. All eyes will be on experienced players here and Soumya Sarkar is likely to dominate today.

Mahmudullah is in good form at the moment. He recently scored 62* runs and has 67 runs in total with the bat. He also is in good form with the ball, has scored to pick up five wickets from the three innings so far. He has an economy rate of 7.50.

Mushfiqur Rahim needs no introduction. He is in good form but is yet to score big here. He has an average of close to 45 while striking at 141.76. He so far has scored 89 runs from his 4 outings with the best of 38* runs to his name.

Soumya Sarkar’s all-round ability makes him one of the best picks for captain here. He so far has a couple of 15-plus scores and also has managed to pick up a wicket. Most importantly, he is among the top fielders in this tournament.

Mahedi Hasan is yet another player who can contribute from both fronts. His best performance came against team PBCC recently where he ended up grabbing a couple of wickets. He will be keen to add more wickets to that tally.

Who Will Win Today Between AL vs GGC Dream11 Prediction, Match 28?

According to Kheltalk’s astrology AL vs GGC Dream11 match Prediction, The former champions AL will begin this contest as favourites because of their form. However, one cannot take GGC lightly because of the stalwarts present in the team. Though they are not in good form at the moment, they are just too good to be ignored.

According to Kheltalk’s AL vs GGC Dream11 toss prediction, AL is likely to bat second here. Since it is likely to rain, most teams will prefer batting second at this venue. One can expect something around 150 here and anything below that is easily chasable.