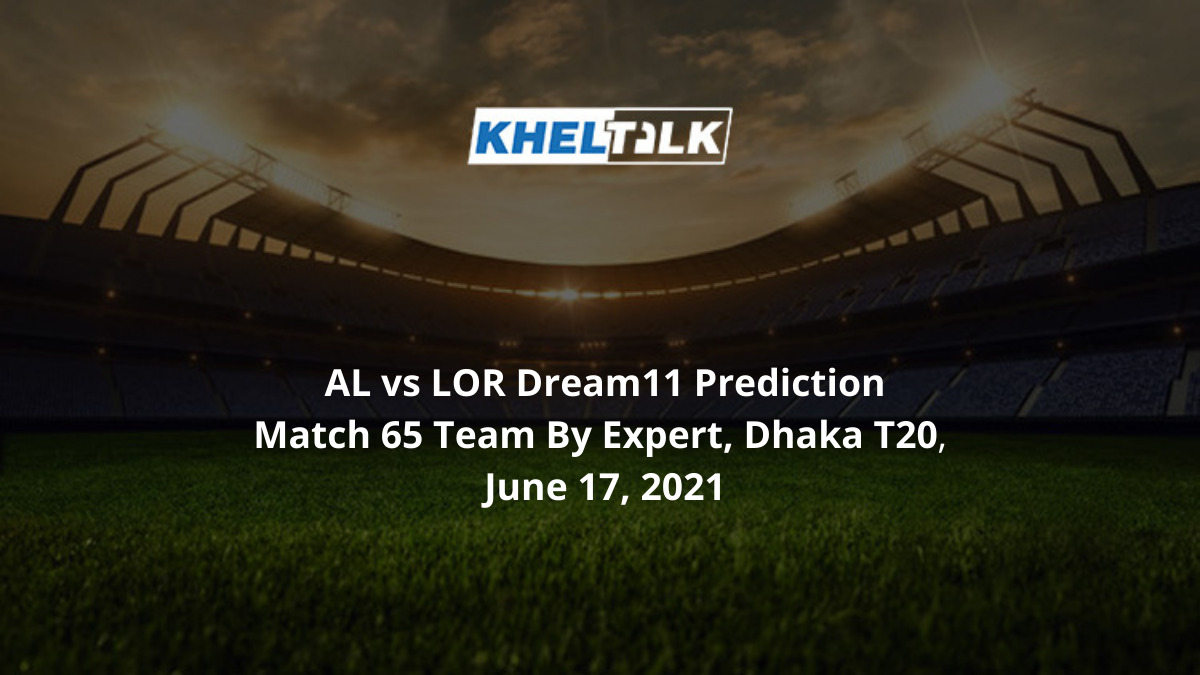 Welcome to AL vs LOR Dream11 Prediction for Today’s Match Fantasy Cricket. Legends of Rupganj will take on Abahani Limited in Match 65 of the Dhaka T20 on Wednesday, June 17, 2021, at the Shere Bangla National Stadium, Mirpur, Dhaka. Keep reading to find out about the Match 65 AL vs LOR Dream11 team today.

Legends of Rupganj are having a forgettable tournament here. The team has lost six matches out of their nine and have won only two. They find themselves at 11th position in the points table and will begin this match as underdogs.

Abahani Limited is one of the favorites to lift the trophy and they are in the 3rd position at the moment. They have won six out of their eight matches and are likely to win this contest as well. A win here will take them to the second spot on the table.

Most of the matches at this venue went for a lot of runs, compared to the other two venues. The team batting first has managed to win more matches, especially, in recent times, with four out of five matches going to the batting team. The average first innings score at this venue is 167.

The team has lost three matches in a row and will look to bounce back in order to end the tournament on a high. They have nothing to lose here and thus, one can expect them to play with freedom today. Sabbir Rahman will lead the attack while one can expect Islam to do well here.

Since this is the last league match, the team will look to win this contest as this could take them to the 2nd spot in the points table. Mushfiqur Rahim will lead the batting attack while Saifuddin will be the player to watch out for in this contest.

Munim Shahriar has been one of the consistent performers in the tournament. He averages 47 here with the best of 92*. He has scored 235 runs with a strike rate close to 156. He will lead the race for captaincy in the fantasy side today.

Mushfiqur Rahim had only fewer opportunities to bat in this tournament but he has managed to make full use of it. He averages close to 44 here with a strike rate of 129.85. Since he bats in the lower order, one can expect a quick cameo from him today.

Sabbir Rahman is the best batter available on the LOR team. He will be leading their batting attack once again and is likely to do well in this contest. He so far has scored 137 runs from his nine innings and is likely to bowl as well.

Mohammad Saifuddin has dominated with the ball and is likely to pick at least a couple of wickets here. He so far has nine wickets to his name while giving away 5.97 runs per over. He can bat too, has scored 54 runs with the best of 40.

Nabil Samad has been excellent with the ball and he has an economic rate lesser than six. He so far has picked up eight wickets with the best of 3 for 1.

Tanzim Hasan Sakib might be a bit expensive but is among the wickets. He so far has picked up 10 wickets with the best of 3 for 9 and is likely to dominate here.

Who Will Win Today Between AL vs LOR Dream11 Prediction, Match 65?

According to Kheltalk’s astrology AL vs LOR Dream11 match Prediction, team AL is likely to win this contest. They will be keen to finish second in the points table. However, they will take team LOR lightly as they have nothing to lose here.