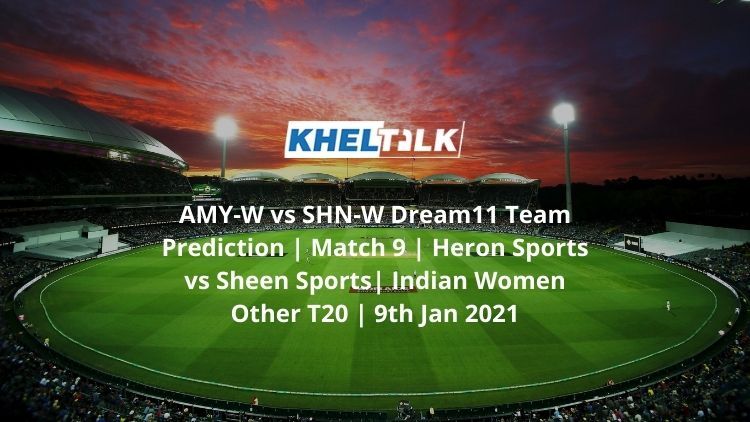 Ameya Sports and Sheen Sports will now step up head to head in the next fixture of the Indian Women’s T20 Cup. Sheen Sports have lost their last game against Kini RR Sports by merely 12 runs. On the other hand, Ameya Sports are currently trying to defend 129 runs against Heron Sports. However, they could only manage to win just one game out of three. Let’s go through AMY-W vs SHN-W Dream11 Team Prediction for the upcoming encounter of Indian Women Other T20.

The surface at Samprasiddhi Sports Estadio has shown us equal support to the batsmen as well as the bowlers. But batsmen must take time in the initial overs as the bowlers might get a bit of swing, otherwise, the pitch gets balanced in the middle over.

Ameya Sports haven’t been in good form lately. Losing three games would have killed their confidence. Kamini and Prasad will open the innings, followed by Krishnamurthy and M Meshram. Anuja Patil and A Kohli will lead the middle order, meanwhile, Pranavi Chandra, Sahana Pawar, and Uma Kashvi will provide justice to the middle order.

Sheen Sports started off well in the previous game while chasing 129 runs on the board but despite having wickets in hand, they lost the game by 12 runs. Middle-order needs to capitalize well and help the team to get past the target. Rodrigues and Dinesh will again open the innings followed by K Rakshitha and Deepti Sharma. Nagarajan and Henry are there to hold the middle order, while bowling was quite economical in the last game, so no changes are expected from the bowling department. Gayakwad, Sharma, and Rakshitha will lead the pace attack.

J Rodrigues has scored maximum runs in the tournament so far. She has smashed 11 runs in 3 innings at an average of 37.00 and with a strike rate of 119.35 including 13 fours and 3 sixes.

So far, Nikki Prasad has scored maximum runs for Ameya Sports. Playing three innings, she has scored 92 runs at an average of 30.66 with a strike rate of 109.52 including 13 fours and 2 sixes. Don’t miss her out as she is capable of turning things around.

Deepti Sharma has been quite impressive with the bat as she has scored 72 runs in 3 innings but she has been super lethal with the ball. Playing four matches, she has bagged 7 wickets at an economy of 3.10. Best choice as a vice-captain or even captain.

Rakshitha Krishnappa has bagged maximum wickets for Sheen Sports. Keeping ger economy under 6, she has made it troubling for the batsmen to read her ball well. In four games, she has 8 wickets scalp at an average of 9.87. She has also scored 43 runs off her bat.

AMY-W vs SHN-W Team11 Team Prediction: Who will win the match

Sheen looks more balanced than Ameya at this point in time. They have better hitters as well as wicket-takers such as Deepti Sharma and Krishnappa. So our Dream11 Team Prediction experts think that this will going to be a close encounter but in the end, Sheen would notch a victory here.