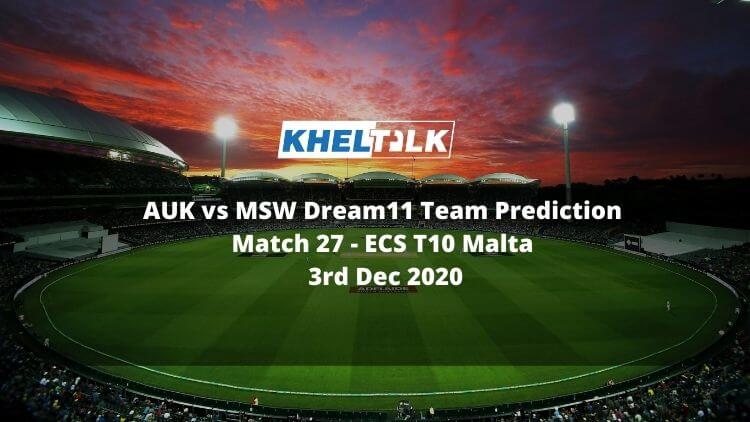 Atlas UTC Knights CC will lock horns with the Msida Warriors CC in the 27th match of ECS Malta T10 League. Atlas UTC Knights CC is unbeaten in the tournament and at the top of the table. On the other hand, Msida Warriors have won 3 out of their 6 matches and are placed at 4th position as of Tuesday. This match is important for MSW in order to qualify for the next stage of the tournament. While Msida Warriors have won two matches while batting first and one match while chasing. On the other hand, Atlas UTC Knights CC is having an excellent tournament and is consistently scoring over 100. A few days ago, they chased down 139 with ease and won the match by 8 wickets. Let’s go through our Dream11 Team Prediction for the upcoming game of ECS T10 Malta.

The pitch has improved and is batsman-friendly now. We have seen teams scoring 100+ runs with ease and the chasing teams are almost pulling it off. However, the team that bats first still have the upper hand in this fixture.

Samuel Sanish Mangat Stanislaus is the top choice for the captain. He is the leading run-scorer of the tournament with 260 runs with an average of 86.66 and a strike-rate of 189.78.

Rahul Nair has been consistent both with bat and ball in the tournament so far. He has 168 with the strike-rate close to 172 and also has five wickets to his name.

Manuel Antony is the leading wicket-taker of this team at the moment. He has 7 wickets to his name with the best of 3 for 16. He has an economy rate of 7.90.

Basil George is one of the top-scorers in the tournament. He has 180 runs with a strike-rate close to 198. He can also roll his arms for a few useful overs.

AUK vs MSW Dream11 Team Prediction: Who will win the match

Atlas UTC Knights CC will begin the contest as the favorites and they will look to extend their unbeaten run in the tournament.