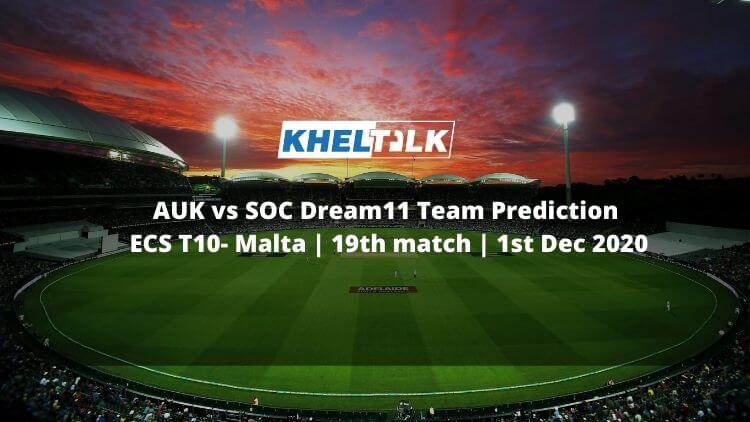 On the other hand, Atlas UTC Knights CC is having an excellent tournament too and have won 3 out of their 4 matches with one match being washed off due to rain, as of Sunday. They are currently at the 3rd position in the table. Both the teams are very balanced and are likely to produce an extremely entertaining match here. Interestingly, Southern Crusaders CC have won all their four matches while chasing and they have lost both their matches while batting first. Atlas UTC Knights CC’s two out of the three wins came while defending the target. Let’s go through our Dream11 Prediction for the upcoming ECS T10 Malta game between AUK and SOC.

The team will enjoy batting first at the Marsa Sports Club as the conditions tend to get difficult to bat during the second innings. As of Sunday, the team batting first has won most of the matches and was able to defend low scores as well.

Average score at this venue: 91 (based on last five completed games)

The wicket-keeper Gopal Thakur has been consistent throughout the tournament. He is the leading run-scorer for his team. He averages close to 31 and has a strike-rate of 133.82.

Zeeshan Yousaf, the MVP of the team has contributed both with bat and ball so far. He has 4 wickets to his name while giving away just 6.25 runs per over and also has scored 88 runs with a strike-rate 139.68.

Eardley Chandiram is the leading wicket-taker for Southern Crusaders CC with five wickets to his name. He has the best of 2 for 4.

Eldhose Mathew has picked up five wickets in the tournament so far with the best of 2 for 9. He has an economy rate of 6.40 and is a useful batsman in the lower order.

AUK vs SOC Dream11 Team Prediction: Who will win the match

Since both the teams are in excellent form, it is difficult to predict the winner here. However, Southern Crusaders CC will begin this contest as the favorites.