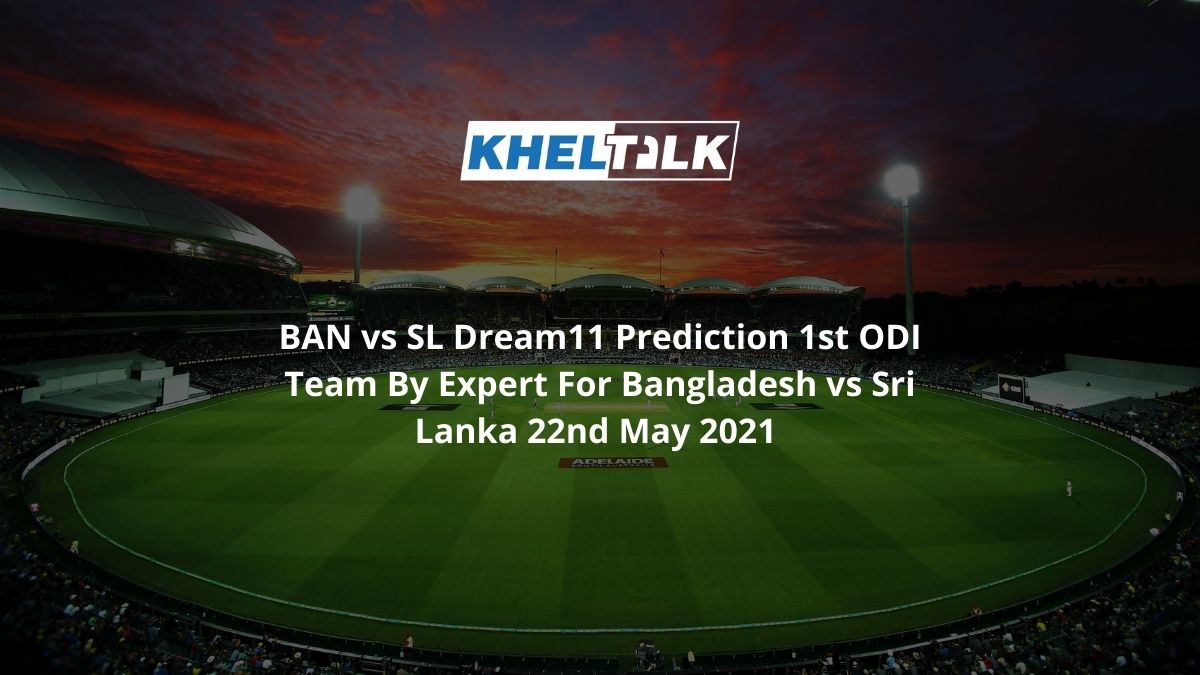 Welcome to BAN vs SL Dream11 Prediction for Today’s Match Fantasy Cricket. BAN will take on SL at Shere Bangla National Stadium in Dhaka in 1st ODI of the three-match series starting on Sunday, 22nd May 2021. Keep reading to find out about the BAN vs SL, 2020-21 1st ODI Dream11 team today.

Bangladesh and Sri Lanka will be ready lock horns in the important ODI series. Both the teams will also have a focus on improving their rankings in which they can be spotted in the lower half of the charts. The hosts had a interesting few months. They first clean sweep West Indies in ODI series then went onto suffer a clean sweep in the next series against New Zealand. Now, they will be looking to come back on the track by outclassing islanders.

Sri Lanka also looks out of form as they suffered humiliating series defeat against West Indies before pandemic came into picture. They have landed in Bangladesh with a new skipper Kusal Perera and will be expecting turn in their fortunes from the Bangladesh series.

The pitch of the venue is known for assisting the spinners and both the teams have some brilliant spin heads on their side. Pacers will not get much support from the track except for the first few overs of the game. The fans can expect an high scoring encounter looking forward to the batting firepower in both the teams and chasing side will have an edge in the game.

There is no chance of rain and Dream11 fantasy game players have nothing to worry. The wind will not be on a higher side and it will not help pacers to reap out swing. So, the Dream11 users can pick more number of batsmen.

Skipper Tamim Iqbal has confirmed that Shakib Al Hasan is set to play for the national side after returning from India. The pro tip for the Dream11 players is that the star all-rounder will bat at number three in the match. So, they should not avoid picking him in their fantasy team.

There were concerns around Mustafizur Rehman but he has been cleared fit for the 1st ODI against Sri Lanka.

Dream11 users will be confused on which batsman will play between Soumya Sarkar and Mohammad Mithun. We clear that confusion as the latter is most preferred choice looking forward to his convincing batting form.

Sri Lanka team management will opt for many changes in their side from the one that played in their last ODI. But one thing is confirmed that SLC board has placed their bets on few debutants in the upcoming ODI series. Ramesh Mendis and Chamika Karunaratne are the expected players to make their debut in international cricket in the 1st ODI against Bangladesh.

The left-handed veteran opener will have a big responsibility on his shoulder in order to help his team from getting off to a good start in 1st ODI. If he gets going then Sri Lanka bowlers will have no place to hide against the destructive opener.

Kusal Perera has a brilliant record batting in Bangladesh. He is known for his destructive batting from the middle-order for Sri Lanka. And, the southpaw will leave no stone unturned in leading his side to a win in his first game as a skipper after the removal of Karunaratne

He is one of the player that can never ignored in any of the team. The star all-rounder holds several world records in international cricket to his name. And, in Bangladesh he becomes more dangerous with the bat and ball. This is the reason why he should be picked as the skipper or vice-captain in the 1st ODI in Dream11 fantasy team

Who Will Win Today Between BAN vs SL Dream11 Prediction, 1st ODI?

According to Kheltalk’s astrology BAN vs SL Dream11 match Prediction, both the teams are coming with defeats from their previous series. However, looking forward to current line-ups, hosts (Bangladesh) look favorite to win the match.

According to Kheltalk’s BAN vs SL Dream11 toss prediction, Bangladesh is expected to win the toss in the 1st ODI of the three-match series against Sri Lanka. And, they will look to the field first in order to have an edge over the visitors.