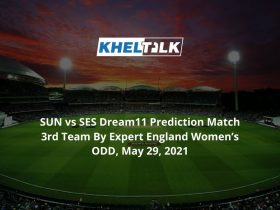 According to BAN vs SL Dream11 Prediction for Today’s Match Fantasy Cricket, BAN will take on SL at Shere Bangla National Stadium in Dhaka in the 2nd ODI of the three-match series starting on Sunday, 25th May 2021. Keep reading to find out about the BAN vs SL, 2020-21, 2nd ODI Dream11 team today.

Bangladesh outclassed Sri Lanka in the series opener by a margin of 33 runs. Mushafiqur Rahim was back at his sublime best with the bat. He played a vital knock of 84 runs off 87 balls in the 1st ODI. He got good support from Mahmudullah, who smashed 54 runs. Meanwhile, Bangladesh skipper Tamim Iqbal also managed a decent fifty for his side. In bowling duo of Mehidy Hasan and Mustafizur Rahman took a total of seven wickets and broke the backbone of Sri Lanka’s batting line-up. The Dream11 users will be expecting same kind of performance from the players as well.

Sri Lanka will look to get back on the winning track against Bangladesh. The former’s top order failed in clicking good knock with the bat due to which islanders failed in chasing a respectable total. But, one positive prospect for their side was the brilliant work of their bowlers. The visitors will be expecting the same kind of performance from its bowlers.

The game will be played at the same venue where the series opener was played. In that game, the bowlers with variations in the bowling got success in the 1st ODI. And, the same is expected in the 2nd game of the three-match series as well. The side scoring between 260 and 290 will have an edge in the match. Also, the side winning the toss will look to bat first at the Sher e Bangla Stadium in Dhaka.

The Dream11 users should know that their is no chance of rain on the matchday. Meanwhile, the wind will be blowing at a low rate. It indirectly means fast-bowlers will have nothing much to get help. They can use variations while bowling once ball gets old in order to trap fast-bowlers.

The 1st ODI match winner Mustafizur Rehman sustained a calf-injury that looked like a minor one. But, hosts might look to replace their one of the most senior player with young batsman Shoriful Islam. Bangladesh will not like to risk their star player at any cost.

Shoriful Islam is tipped to make his debut in ODI for Bangladesh. Tamim Iqbal and Liton Das will continue as opener in the 2nd ODI as well. Rest no changes are expected from the hosts in their final playing 11.

Sri Lanka has several bases to cover ahead of the second ODI match. Islanders might opt for few changes in their final playing 11 going ahead in the upcoming one-day international.

Isuru Udana’s poor run with the ball continues and he failed in taking single wicket in the 1st ODI. He gave away 64 runs in his 10 over spell and registered expensive bowling figures. He might be replaced with Ramesh Mendis.

Kusal Perera showed a glimpse of his good form in the 1st ODI and he got to a good start. But, he failed in converting it into a big score. The southpaw managed 30 runs with the bat and the southpaw is expected to come to all guns blazing in the 2nd ODI. The Dream11 users are advised not to ignore him while picking their fantasy team.

The veteran smashed a decent fifty for his side in the series opener. He justified his position in the side with his brilliant knock against Sri Lanka. His fine form with the bat makes him an appropriate contender for the 2nd ODI.

Shakib Al Hasan looked pale in the 1st ODI against Sri Lanka. He failed in performing with the bat and ball. The southpaw is a big match-winner and he is known for making a strong comeback with his impressive performances. The star player can be picked as the skipper of any Grand League team and Shakib Al Hasan will help users in grabbing important credits with his bowling and batting.

Who Will Win Today Between BAN vs SL Dream11 Prediction, 1st ODI?

According to Kheltalk’s astrology BAN vs SL Dream11 match Prediction, Sri Lanka is expected to win the upcoming match bouncing back in the ongoing ODI series. They lost the previous game by a small margin due to the poor show of their batsmen. If they managed a good show in the 2nd ODI then Sri Lanka will become probable contenders of winning the match.

According to Kheltalk’s BAN vs SL Dream11 toss prediction, Bangladesh is expected to win the toss in the 2nd ODI against Sri Lanka. And, they will look to the bat first in order to have an edge over the visitors.