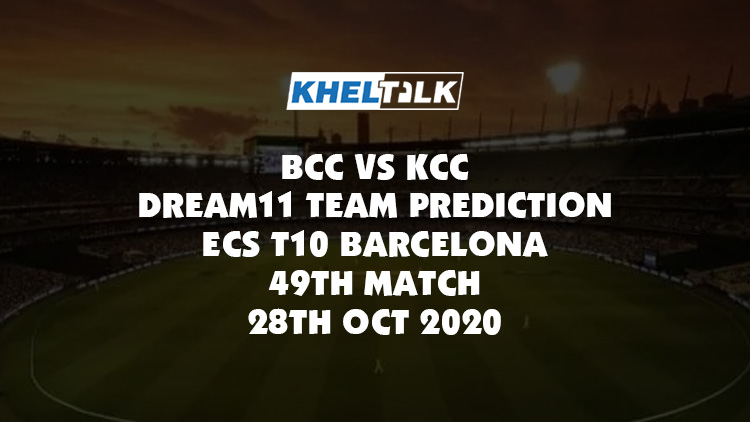 The 49th fixture of ECS T10 Barcelona will be played between Kings CC and Bengali CC on 28th October. Talking about the Kings, they have won five out of six games which makes them sit at the second spot of the points table, while Bengali CC is at the bottom with not a single wins so far. The match is scheduled to be played at Montjuic Stadium in Barcelona. Here we have tried our best to provide you with the best BCC vs KCC Dream11 Team Prediction, Top Captain & Vice-Captain Picks, Head to Head, Grand League, and Fantasy Tips.

The surface has now turned in the favor of bowlers. Batsmen must take their time to settle on the pitch. Spinners will be seen struggling at this surface.

Riaz Howlader has been impressed with both bat and ball. Playing four games, he has scored 65 runs at a strike rate of 110.17. He has also chipped six wickets at an economy of 7.00. Don’t miss him out.

Tahed Ahmed has scored 90 runs in 4 innings at an average of 22.50 with three sixes and 6 fours to his name. He has got some important wickets with his bowling skills as well. Picking four wickets at an economy of 7.86.

Omar Ali has bagged five wickets in three games at an economy of 8.62 and has 45 runs in those particular games. You can choose him as your vice-captain.

BCC vs KCC Dream11 Prediction: Who will win the match

Kings would surely dominate Bengali in this match as Bengali hasn’t won a single game and lacks confidence. We bet Kings to win the game here going ahead