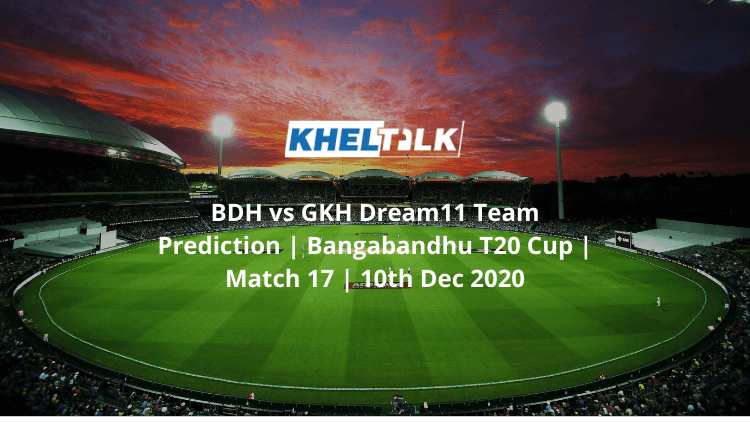 Gemcon Khulna will lock horns with Beximco Dhaka in the 17th match of the tournament. Gemcon Khulna will be looking to bounce back after their heartbreaking defeat to Gazi Group Chattogram in the final ball of the match where Shamsur Rahman smashed a six when the team needed 2 runs to win from the final delivery.

On the other hand, Beximco Dhaka is on a three-match winning streak and will look to continue their streak. However, their last defeat in the tournament came against Gemcon Khulna where the latter won the match with ease by 37 runs. Let’s go through our Dream11 Team Prediction for the upcoming game of the Bangabandhu T20 Cup.

The conditions at Shere Bangla National Stadium at Dhaka have improved considerably and is a good track to bat on. A few nights ago, Minister Rajshahi smashed 220 runs in their 20 overs and Fortune Barishal chased down the total in 18.1 overs.

Total Matches in the tournament so far: 16

Despite his form, Shakib Al Hasan is still one of the top picks for the captaincy, thanks to his experience. In the tournament, Shakib has 5 wickets and 74 runs so far.

Mushfiqur Rahim is probably the best batsman available in this fixture. He has 211 runs at an average of 52.75 and has a strike-rate close to 115.

Mahmudullah is the leading run-scorer for Gemcon Khulna. He has 151 runs with a strike-rate close to 118. He can also roll his arms for a few quick overs.

BDH vs GKH  Dream11 Team Prediction: Who will win the match

Gemcon Khulna looks more balanced than Beximco Dhaka, thanks to the presence of experienced players who have represented the country. They will begin this match as the favorites. Our Dream11 Team Prediction experts expect it to be a close clash between two good teams. But, GKH will come out as winners.