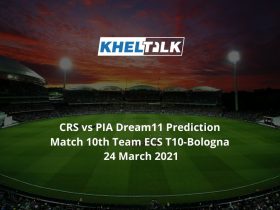 Bangladesh will once again host South Africa Emerging Women for the 2nd match of the series. Both the management have come up with this tour in order to train their young players and to get them match-ready as a plan for the upcoming World Cup.

There are multiple players who will tour alongside their teams at least as a backup in the upcoming tours. Due to this pandemic, a lot of international players didn’t get an opportunity to get back on tour and the Bangladesh team is one of them. Thus, in this Emerging team, one can find some of the major Bangladesh cricketers as well.

In the first match, Bangladesh went on to defeat South Africa with ease, thanks to the all-round performance from the team.

Here are the stats for the teams BDW-E vs SAW-E :-

This stadium recently became one of the newest to host ODIs, thanks to the pandemic. Bangladesh recently hosted Zimbabwe where the hosts emerged as the winners. In four ODIs here, three of them were won by the team that is batting first and the average first innings score here is 291.

A bright sunny day awaits us on Tuesday. This is usually summertime in Sylhet where we don’t get rains or even drizzles regularly during this time of the year. Thus, a good sunny day awaits us. The temperature will fluctuate from 29 degrees Celcius to 33 degrees Celcius. Since this is a morning match, the teams batting first will enjoy the climate more, making the toss crucial.

Both teams are filled with young talents. However, Bangladesh does feature some of the international players who have been around for a while now. Make sure to pile up your team with those players as their experience will come in handy here.

Once again the team will be dependent more on players like Jahanara Alam when it comes to bowling. In batting, Fargana Hoque and Nigar Sultana will be leading the way for the team.

Most of the players in the team recently played the domestic tournament before getting here and players like Jafta and Bosch recently had international matches as well. A lot will depend on them here for sure.

Anneke Bosch will be kicking herself for the struggle in the last match. She wasn’t up to her standards and that’s a worry for the team as a lot depends on her here. She will be bowling her full quota here and will be batting at number four for the team. A better performance from her will certainly put the team back on track.

Fargana Hoque played her first match since the World Cup T20 and showed no struggles at all. She took on the bowlers with ease and gave Bangladesh a good start with the bat. She stood unbeaten with 72 on her board. It was unfortunate that she kept running out of partners.

Andrie Steyn was one of the leading run-scorers in the domestic tournament that had happened recently. She had managed to carry the form into this series and did well to score 41 runs in the last match while opening the innings for the team. She will be looking to convert her starts here for sure.

Rumana Ahmed’s experience and the way she usually holds the middle-order makes her a must-have pick in the contest. She is just too good to be ignored and in the last match, she ended up grabbing two wickets to her name. We can expect her to come up with a better batting performnace here.

Salma Khatun was the star performer for the team with the ball, she ended up picking three wickets while giving away just 25 runs. Most importantly, she opens the bowling for the team.

Here is the Dream 11 Team prediction for BDW-E vs SAW-E. We are going with players who are currently in good form and can win the match with ease.

Head To Head Team For Bangladesh vs South Africa

Who Will Win Today Between BDW-E vs SAW-E Dream11 Prediction, Match 2?

According to Kheltalk’s astrology BDW-E vs SAW-E Dream11 match Prediction, BDW-E will win the match. Comparatively, the hosts have a good balance. Also, they have players who have done well in the international circuit as well.

According to Kheltalk’s BDW-E vs SAW-E Dream11 toss prediction, BAW-E will win the toss and opt to bat first. Since Bangladesh have done well while batting first, we can expect them to go for the same here.