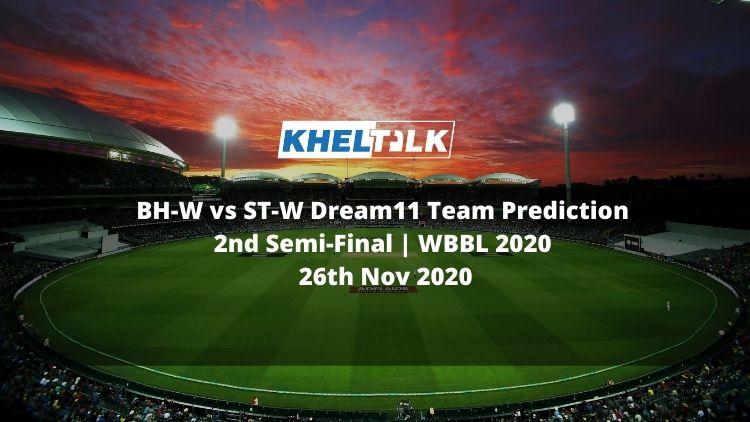 After an enthralling league stage, the Rebel WBBL is now all set for the semi-final games. In the second semi-final, Sydney Thunder will meet Brisbane Heat. Both teams are in great form. So this should be an exciting contest between the bat and the ball. Brisbane ended at second place in the points table with 8 wins in 14 games while Sydney won 7 games and was placed third. Let’s go through our Dream11 Prediction for the 2nd Semi-Final of WBBL 2020 between BH-W vs ST-W

The stadium has seen some good scores and expects this pitch to behave in the same manner. The batters will find it easy to score runs on this pitch.

H Knight is the leading run-scorer for her team and has scored 403 runs at an average of 40.30. She has scored 4 fifties and is a very reliable batter. Knight is known for playing big innings and in the big games. She can be expected to make a big impact. She has a strike rate of 127.53 and has the highest score of 83 runs which reflects her ability to get the big scores when the team needs.

A Kerr is the leading wicket-taker for her team. She has taken 16 wickets and has an effective average of 15.56. She has a strike-rate of 17.3 which means she is a genuine wicket and can claim a wicket every game. The Aussie player bowls the tight lines and has adjusted pretty well to the pitches in this tournament. A Kerr is also a very handy batter and has scored 96 runs at an average of 12.00.

J Jonassen is a must-have player in the team as she is a gun all-rounder and has a habit of making contributions in the batting as well as bowling department. She has 16 wickets in this league so far, the joint-highest for her team. She is also a very effective batter and averages 19.27 with the bat and has scored 212 runs.

H Darlington has bowled in only 10 innings but has made a massive impact with her high-quality bowling. She has taken 15 wickets and has a very impressive strike-rate of 14.0. She averages only 15.06 with the ball and thus is a very reliable bowler. Darlington can be trusted to make an impact in this game too as she is a big match player.

BH-W vs ST-W Dream11 Prediction: Who will win the match

Sydney Thunder has better all-rounders who are capable of winning the big moments. So in this match, Sydney will win the game.