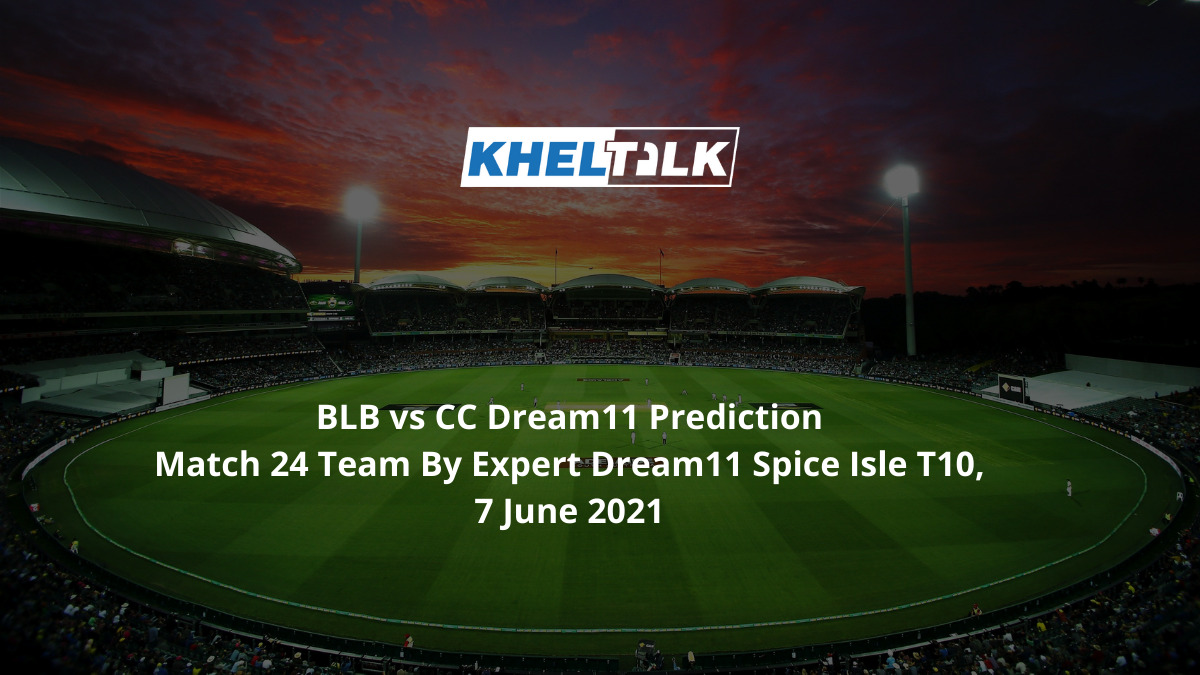 According to BLB vs CC Dream11 Prediction for Today’s Match Fantasy Cricket. Clove Challengers will take on the Bay Leaf Blasters in Match 24 of the Dream11 Spice Isle T10 on Monday, June 7, 2021, at the National Cricket Ground. Keep reading to find out about the Match 24 BLB vs CC Dream11 team today.

Bay Leaf Blasters has been inconsistent throughout the tournament and are at the last spot in the points table with two wins from seven matches. However, when these two teams met earlier, Blasters went on to win by eight wickets. A win here can take them to the fourth position in the points table, thanks to their net run rate.

On the other hand, Clove Challengers are one of the favourites to win the tournament here. They are currently in the fourth position of the table with three wins to their name and a win here can take them to the 3rd spot in the points table. Both teams are coming into this tournament after losing their previous game.

This has been one of the high scoring venues. Most of the teams have managed to score more than 100 runs in almost all the matches they have played, in fact, most of them were chased down with ease. Even in the last match, Nutmeg Warriors were beaten by Saffron Strikers, who ended up chasing 132 runs with ease.

Once again, rain is on cards on Monday here but is unlikely to kill the match. There might be a few drizzles that could delay the proceedings but the match is likely to go on as planned. The temperature is likely to be around 27 degrees Celcius for the most part of the day and there is a 55 per cent chance of rain.

Both teams have a good bowling line-up and have done well while chasing. So, it is good to go with more bowlers and all-rounders in this contest. Make sure to pick more bowlers from the team that is batting first.

Despite having star players in the name of Devon Smith among others, the team has failed miserably and currently needs motivation to pick up the pieces. Once again, they will depend on their captain to lead the team from the front here.

The team is likely to go in with more bowlers here and they will look to dominate right from ball one. Teddy Bishop has been in decent form so far and can be the difference between both teams here. Also, Angel Johnson is likely to play this game.

Darron Nedd is the most popular choice for captain here. He is in decent form and can contribute from both fronts. His best performance came against Nutmeg Warriors where he ended up scoring 51 with five sixes to his name and also had a wicket to this name.

Devon Smith’s experience will come in handy here. He has a couple of 20-plus score and also has scored a fifty so far. His best performance came against team SS where he smashed eight fours and four sixes for his 65 runs.

Markel Baptiste is one of the most picked players here and is likely to play this contest. He can be trusted for his bowling and in the last match against Nutmeg Warriors, he had three wickets to his name. He will be keen to contribute with the bat too.

Denis Smith is the best choice among keepers here. He is in good form at the moment and has been consistent so far. He so far has four 20-plus scores in this tournament with the best performance of 25. It came against team CP.

Who Will Win Today Between BLB vs CC Dream11 Prediction, Match 24?

According to Kheltalk’s astrology BLB vs CC Dream11 match Prediction, CC will begin this contest as favourites. There is not much to separate from both teams and they both are looking to bounce back after their loss in the previous game. However, CC are likely to win this contest because of the form of the players at the moment.