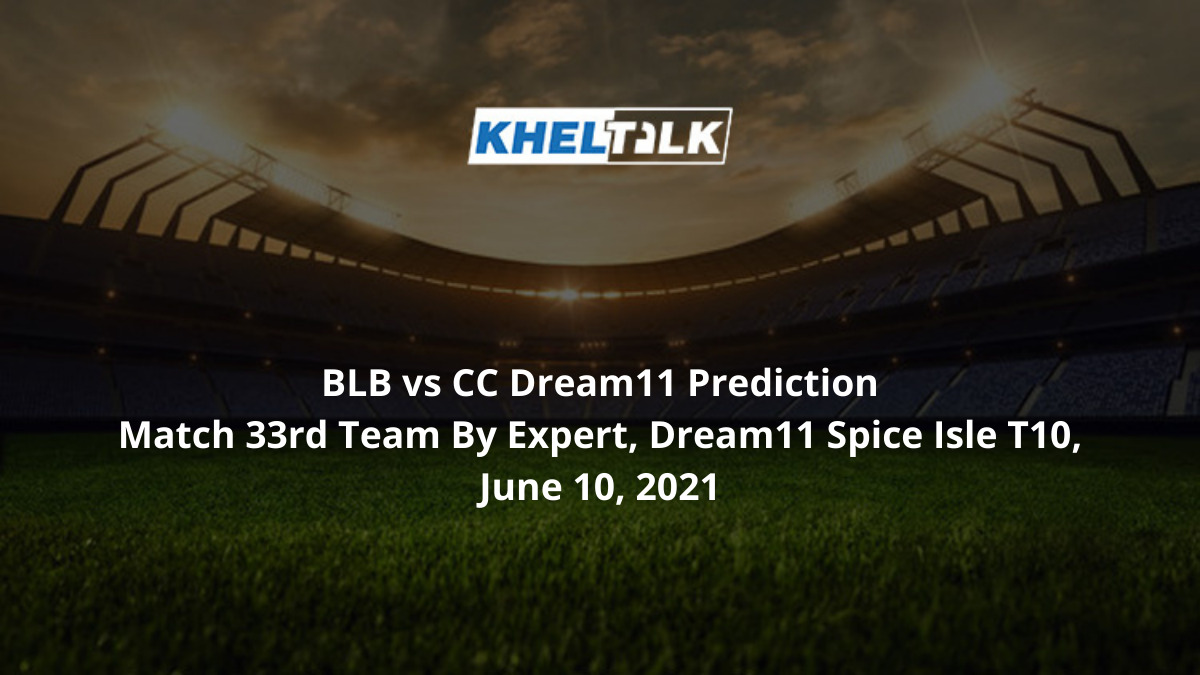 Welcome to BLB vs CC Dream11 Prediction for Today’s Match Fantasy Cricket. Bay Leaf Blasters will take on Clove Challengers in Match 33 of the Dream11 Spice Isle T10 on Thursday, June 10, 2021, at the National Cricket Ground. Keep reading to find out about the Match 33 BLB vs CC Dream11 team today.

The match between Bay Leaf Blasters and Clove Challengers is a fifth-place playoff. The least effective side of the tournament. Playing ten games, Bay Leaf has won three, lost six and one ended up in a draw.

On the other hand, Clove Challengers has also played ten games, winning three, losing six, and one being abandoned due to rain. They are below Blasters in the points table because of poor run-rate.

The surface at the National Cricket Stadium in Grenada is made keeping batsmen in mind. Perfect pitch for the batting. Runs will easily flow here and bowlers will surely struggle here. Only different variations would help them chip wickets at this surface. The weather suggests, overcast conditions, pacers might get some help due to wind.

Thursday at Grenada will be a cloudy one. Overcast conditions will be seen on match day. The temperature is expected to hover around 26.56 with no chance of rain at all.

Challengers are likely to make changes in their bowling department as they have been expensive alot. No combination has been consistent with the performance. In the previous game against Cinnamon Pacers, their bowlers couldn’t stop the run flowing and they lost the game by 21 runs while chasing down 144 runs.

Challengers are likely to make changes in their bowling department as they have been expensive alot. No combination has been consistent with the performance. In the previous game against Cinnamon Pacers, their bowlers couldn’t stop the run flowing and they lost the game by 21 runs while chasing down 144 runs.

C Forsyth has played the skipper part quite well. He has proved his captaincy for Challengers. In the last five games, this lad has added 108 runs to help his team post decent runs on the board or to chase down a tough target.

Darron Nedd has turned out to be one of the most influential all-rounders in the tournament. Not only he has smashed 110 runs but also has one wicket to his name.

D Smith gives a lot of strength to the Blasters’ batting lineup. In the last five innings, he has scored 107 runs and has not let his team time most of the time. You can surely rely on him.

Denis Smith has been quite impressive behind the wickets and has scored 125 runs in the last five innings for Blasters. He has been continuously troubling the bowlers. Best choice as vice-captain.

Who Will Win Today Between BLB vs CC Dream11 Prediction, Match 33?

According to Kheltalk’s astrology BLB vs CC Dream11 match Prediction, Team BLB is likely to start this match as favourites. Well both the teams are out of the contention but will be looking forward to registering a win here. Blasters have a better lineup and inform players to rule Challengers out.

According to Kheltalk’s BLB vs CC Dream11 toss prediction, BLB is likely to bowl first here. Since most of the teams have won the toss and have opted to bowl first, we could expect BLB to follow the same trend here.