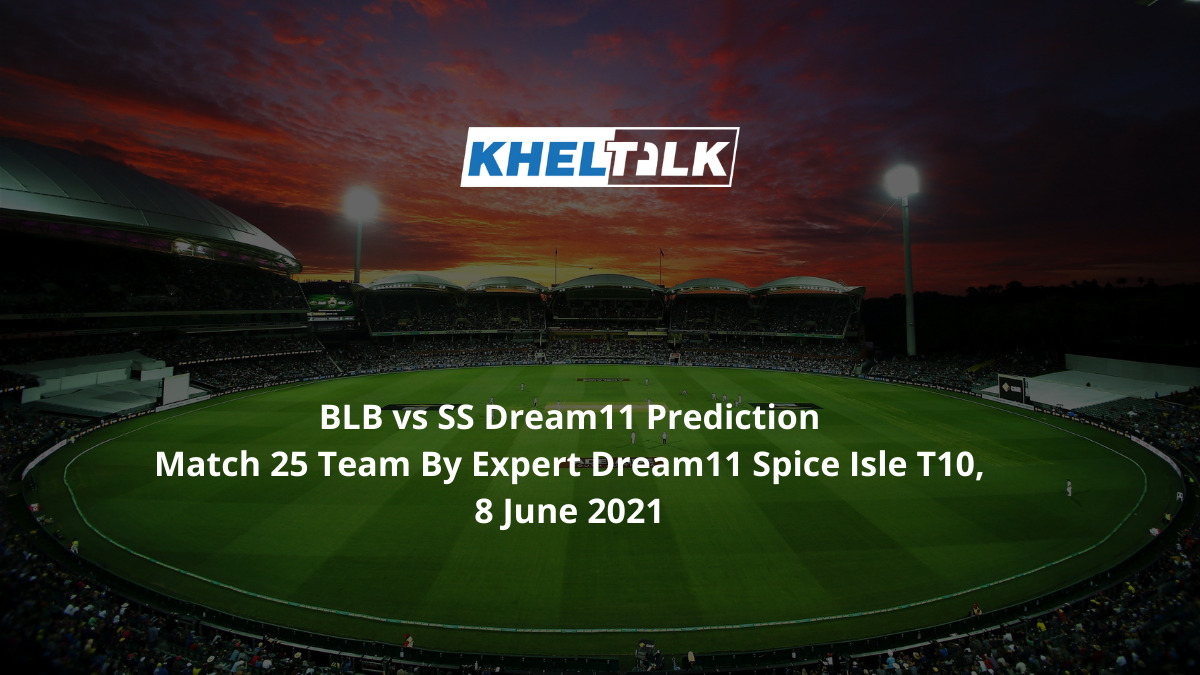 Welcome to BLB vs SS Dream11 Prediction for Today’s Match Fantasy Cricket. Bay Leaf Blasters will take on Saffron Strikers in Match 25 of the Dream11 Spice Isle T10 on Tuesday, June 8, 2021, at the National Cricket Ground. Keep reading to find out about the Match 25 BLB vs SS Dream11 team today.

The Saffron Strikers should be careful this name as Bay Leaf Blasters thrashed them down in their previous outing by seven wickets and were restricted to 119 runs while chasing down 122 runs on the board.

Going by the previous games, we have seen at the surface is treating every team differently. The team batting first has a slight advantage as wickets tend to get slower in the second innings. The pitch has got better for the batsmen, however, bowlers will even have their chances. The average inning score at this venue is 97.

Light Rain is on cards on Tuesday here. Well, light rain would not cost us this match, one can expect the match to go ahead and there might be a bit of disturbance. The temperature will be around 26.5 degrees Celcius during the day and there is a 57 percent of chance for rain here.

Bay Leaf Blasters played their game against CP. Batting first, Blasters top order made some valuable contribution with the bat and posted 105 runs on the board. In response, CP didn’t struggle much and reached the destination with three balls to spare. Blasters might get come up with some changes in their bowling department. M Baptiste can come in for this encounter.

Talking about Saffron Strikers, they won their previous game by 40 runs against Ginger Generals. But they mustn’t forget the defeat against Blasters in their last head-to-head encounter. No changes are expected.

Devon Smith is the highest run-getter for the side. In seven games, he has hammered 169 runs 16 fours, and 11 sixes. He is one reliable opening batsmen and has been in superb form. Don’t miss him out.

Richard Rogers and Keron Charles have been lethal with the ball alongside Baptiste. Both the bowlers have five wickets each in hand but they must look after their economy and try not to give a lot of runs in the death overs.

Michel Joseph has been ruthless to the bowlers. In six innings, he has hammered 176 runs which let us know a lot about his form and skills. He has a strike rate of more than 210 that means, he is capable of turning the tables at any moment.

Alex Moses has chipped wickets so far but has been a bit expensive with the ball. Moses has given breakthrough when needed. There would be a lot of expectation from this lad.

Who Will Win Today Between BLB vs SS Dream11 Prediction, Match 25?

According to Kheltalk’s astrology BLB vs SS Dream11 match Prediction, Blasters are the favourites to win this contest. Blasters would be high on confidence as they thrashed them down in their previous head-to-head encounter. Their bowling department is a serious concern, they must get some changes to raise their chances of winning the game.

According to Kheltalk’s BLBvs SS Dream11 toss prediction, Blasters are likely to bat first here. Blasters have a skilled batting line up and most of the games here at this venue have been won batting first.