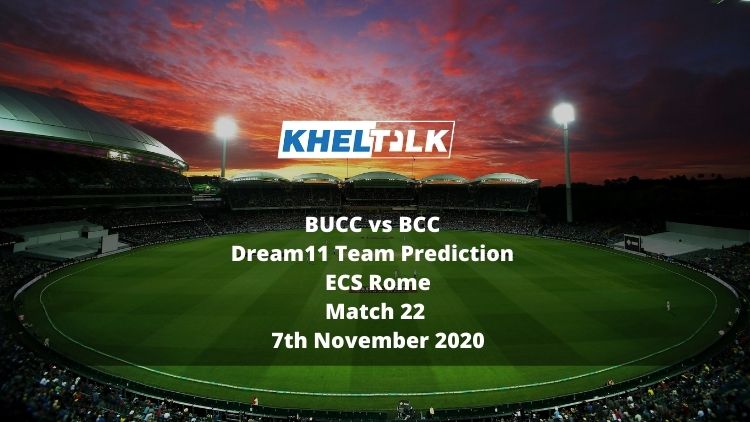 In the 22nd match of the ECS T10 Rome, Bergamo United Cricket Club will take on the Bologna Cricket Club. This is the first match of the day for BUCC, however, for BCC this will be the second match of the day as they are playing VCC earlier in the day. So the management might make some changes in the playing 11 to ensure players are fresh and not exhausted. So let’s have a look at our BUCC vs BCC Dream11 Team Prediction, Top Captain & Vice-Captain Picks, Head to Head, Grand League, and Fantasy Tips.

As this is the second match of the day, the pitch should have become flat by this time making it easier for batsmen for go for their strokes.

M Amin is a very reliable batsman with strong technique. He is in good touch and has got very valuable performances in his recent outings. He got 23 runs off 14 balls versus BCC and then kind of repeated his heroics by scoring 30 runs from 12 balls against VCC.

R Tahir is a flamboyant opener who can use the pace of the new ball to score quick runs. So far he hasn’t got the big innings, but he has certainly got promising starts which means a big score is just around the corner. In his last 2 games, he scored 21 runs each.

F Muhammad bowls the tough lines and lengths making a very good prospect to take wickets. He is on fire in this tournament and is getting wickets in heaps. In the match against BCC, he finished with 2 wickets and then bettered his performance by claiming 3 wickets against VCC.

S Kolli is looking very good with the bat as well as the ball. He can create a big impact in both departments and hence should be a good choice for captain and vice-captain. Against DSC, he scored 32 runs from just 10 balls to provide his team a big flourish and then contributed with the ball as well by picking up 1 wicket.

BUCC vs BCC Dream11 Prediction: Who will win the match

Considering this is the second game of the day for BCC they will be a bit tired. However, BUCC has a good batting core and their bowlers have done well in past and hence they will put pressure on BCC. So BUCC should win this game.