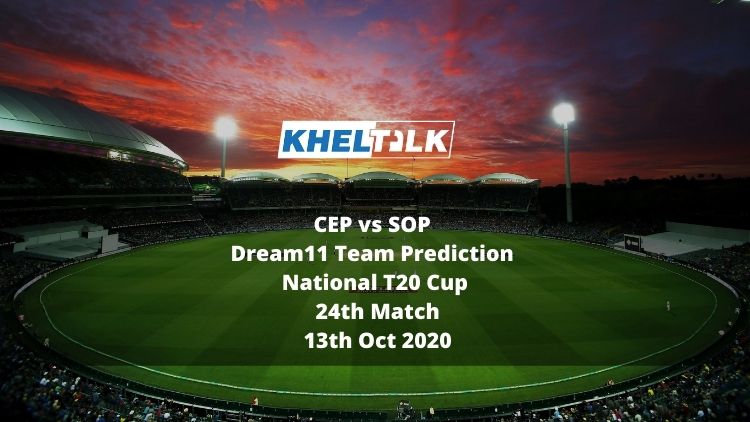 The next fixture of the National T20 Cup will see two slow-moving teams – Central Punjab and Southern Punjab locking horns in the upcoming encounter at Pindi Club Ground, Rawalpindi.

Having lost five games in the tournament, Central Punjab and Southern Punjab sits at the bottom of the points table grabbing fifth and sixth spot respectively. It’s nearly impossible for both the teams to qualify for the next stage, so they both would fight for their pride in the tournament.

Head to Head for CEP vs SOP:

The conditions at Rawalpindi mostly support the batsmen. The team winning toss must opt for bowling as the chase gets easier at the Pindi surface (according to previous games result).

Pakistan’s most reliable batsmen Babar Azam have shown what he is capable of and can pull off impressive shots with his bat. He has scored 285 runs in 4 innings at an average of 95.00. Best choice as Captain.

Southern Punjab’s Khushdil Shah is in great touch and has notched 217 runs in 6 innings for his side. Having a tremendous strike rate of 193.75, he can make opposition bowlers cry.

Ehsan Adil has bagged 11 wickets in just 6 games at a convincing economy of 8.89. The right-arm medium-fast bowlers can chip wickets in the opening powerplay and make the run-rate slower.

Zahid Mahmood can be your other vice-captain choice as he has almost got wickets in every game. Playing 7 games, he has 11 wickets to his name and is expected to do wonders once again. Don’t miss him out.

CEP vs SOP Dream11 Prediction: Who will win the match

Both the teams have sluggish in this ongoing tournament. Sticking at the bottom of the points table, they have lost the opportunity to enter the next stage. Talking about who would win this match – Central Punjab clearly stands ahead with the likes of Babr Azam, A Shafiq, and R Hussain. So we bet on Central Punjab.