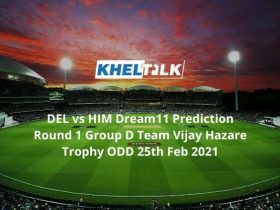 According to CK vs MAL Dream11 Prediction for Today’s Match Fantasy Cricket, Coimbra Knights will take on Malo in the 22nd match of the ECS T10 Portugal on Friday, 16th April, at the Estádio Municipal de Miranda, do Corvo, Keep reading to find out about the ECS-T10 Portugal Match 22 CK vs MAL Dream11 team today.

This is the 2nd time both teams will go toe to toe on Friday. The Knights, despite having some of the well-known players in the team, are struggling at the moment and have won only one match from their six outings. Their only win came against Miranda Dragons who are just below them in the points table.

On the other hand, Malo are enjoying a good tournament so far with three wins to their name from their four outings. They are currently in the 3rd position and a couple of wins here will take them to the top two. The team’s only loss came against the table-toppers Gorkha 11. Going into this contest, Malo are clear favourites and they will look to chase first.

Here are the stats for the teams CK vs MAL

Top performers for CK vs MAL

We witness a cloudy day in Portugal. The maximum temperature will be 23 degrees Celcius during the day and it tends to drop down considerably during the match time. This will make bowling second difficult during the late matches.

Pile up your team with more number of batters and also make sure to pick more players from the Malo team as they are the best among these two. Spinners will have a major role to play in this contest.

With the likes of players like Zaman, Winter who has experience of playing in T10 tournaments already, CK do look good on papers. However, none of their combinations has worked out so far and the team has found themselves on the wrong side of the results.

Malo are having an excellent run in the tournament at the moment and it’s more of a team performance. Almost all the players have stood up for the team in different ways and with Mian Mehmood leading the team from the front, Malo are the team to beat here.

Chris Redhead is having an excellent tournament so far. Despite not having support from the batting side, Redhead has made sure to take the matches closer by picking up wickets and producing dots. He so far has 10 wickets to this name and is the leading wicket-taker for his side. With an economy rate of 6.51, Redhead is a must-have pick.

Tony Madeira is yet another player who is having an excellent tournament with the ball here. He has managed to grab wickets at regular intervals and has picked up five wickets with an economy rate lesser than nine. He is also a brilliant batter but is yet to get a chance here.

Here are a few choices for CK vs MAL vice-captain

Syed Maisam has contributed from both fronts for the team. He has been excellent with the ball, has picked up three wickets so far and most importantly, has 61 runs to his name and is the leading run-scorer for Malo at the moment.

Najam Shahzad is yet another all-rounder who is one of the reasons for Malo’s success here. He has picked up 4 wickets so far and also has a couple of cameos to his name. He is the current 2nd leading run-scorer for Malo and has a strike rate in the 130s.

Mian Mehmood has been consistent with the ball and is the leading wicket-taker for Malo at the moment. With an economy rate lesser than 6, Mehmood is more of a mandatory pick here.

Petro Madeira did not play the initial matches for the team but is already the leading run-scorer for his team. He was the star performer in the team’s only win where he smashed an unbeaten 45.

Who Will Win Today Between CK vs MAL Dream11 Prediction, 22nd Match?

According to Kheltalk’s astrology CK vs MAL Dream11 match Prediction, the MAL will win the match. Malo has been one of the teams to beat in this contest. On the other hand, Knights are yet to work out on their line-up and the time is ticking for them. Going by what we have seen here, Malo will win this contest convincingly.

According to Kheltalk’s CK vs MAL Dream11 toss prediction, MAL will win the toss and will opt to bowl first. Since this is a late match, the climate will make it difficult to bowl in the 2nd innings, which makes the chase easier. Whoever wins the toss will opt to chase here.