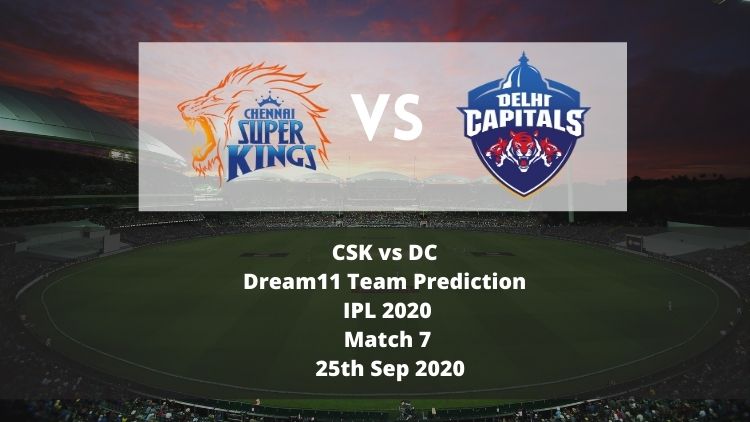 Indian Premier League 2020 is nowhere disappointing its fans. Even after a good start, Sunrisers Hyderabad had to be on the losing side against Royal Challengers Bangalore, meanwhile, Delhi Capitals were lucky to grab their maiden win of the IPL 2020 against King Xi Punjab. Now Delhi Capitals, lead by Shreyas Iyer have a tough opponent ahead and will have to keep the momentum high to avoid the pressure against Chennai Super Kings in the upcoming clash.

Dhoni & Co. suffered 16 runs defeat in their previous game against Rajasthan Royals and surely with the skipper experience, CSK would step up with immense confidence and try not to repeat the mistakes committed against Royals.

The match is supposed to be played at Dubai International Cricket Stadium, Dubai.

Witnessing the previous game, pitch tends to get slower at the end of the game, even the dew plays make things worst for both sides. Spinners again are expected to deliver better. No rain is expected whatsoever.

You can check out the latest IPL Updates & News here

M.S Dhoni can be really effective if he somehow manages to make himself up the order. He has an outstanding record against Delhi Capitals. In 22 innings, he has smashed 572 runs at an impressive average of 35.76. Having scored unbeaten 63, Thala has three half-centuries against the Capitals. Don’t miss him out this time.

Delhi Capitals opener can be lethal with his bat, so don’t judge him by his inning in the opening game. He must be your pick as he has scored 641 runs in 21 innings at a strike rate of 122.56. He would be keen to register his 7th half-century against the Dad’s Army and also would be looking forward to breaking his record of 79 runs scored against the same opponent.

It looks like, Faf isn’t looking to kill is momentum anytime soon. He has been outstanding with the bat as well as in the deep fields. He has the highest scorer with 130 runs in his baggage and is again expected to talk loud with his bat. Not only with the bat, but he will also even earn you points with his fielding and catching skills for sure. Don’t dare to miss him.

Sam Curran is one suitable option as a Vice-Captain. Playing two games so far, he has bagged four wickets and has scored 35 runs off his bat. This complete all-rounder has already won hearts with his performance and will keep his momentum high for the rest of the tournament.

Another vice Captain choice can be Marcus Stoinis, he was exceptionally lethal with his bat in the previous game as he notched 53 runs off just 21 balls at a strike rate of 252.38. The Australian all-rounder also took two crucial wickets to stop KXIP to reach the target.

CSK vs DC Dream11 Prediction: Who will win the match:

Skipper Shreyas Iyer would be in enormous pressure as next, he will be facing off none other than M.S Dhoni, who has been a successful captain of this format. Young lad Iyer would surely come up with multiple plans to trouble Dad’s army, but it seems less likely that any plans would go really upset Dhoni & Co. Seeing their head to head record, and much-balanced team, CSK will easily win the games against the Capitals.