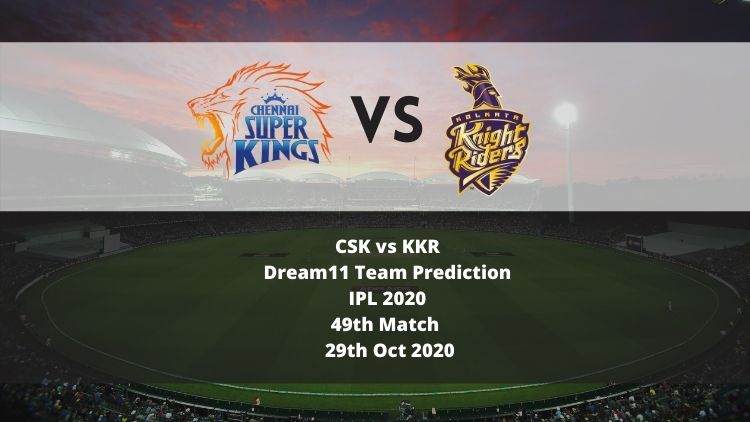 IPL 2020 that got kicked off September 10 is moving towards its business end. And, the battle to qualify for the playoffs is getting intense with every passing game. Now Kolkata Knight Riders will take the field against Chennai Super Kings in the upcoming game. KKR is still fighting for the playoffs. But CSK has been already knocked out from the tournament. It will be interesting to watch if the yellow army can splash water on the dreams of KKR qualification or not in the upcoming affair. Today, we are here for its Dream11 Team Prediction. So let’s have a look at our CSK vs KKR Dream11 Team Prediction, Top Captain & Vice-Captain Picks, Head to Head, Grand League, and Fantasy Tips.

Head to Head for CSK vs KKR:

The pitch of Dubai International Cricket Stadium is getting slower and slower with every passing game. Although, in the previous game, the side batting first managed a big score. But, fans should not expect another high scoring game going ahead in CSK and KKR game. The spinners will dominate in the match. And, batsmen will have to get settled before taking the charge against the bowlers.

Ambati Rayudu has got some good starts in the tournament. But, he has failed to convert them into match-winning knocks. Now, when his side has been knocked out from the tournament then he might get a license from the management to go out and express himself in the best possible way.

Faf du Plessis is the only in-form player of Chennai Super Kings. He has got the caliber to click a breakthrough knock for his team and will be a perfect player to pick under this category.

Eoin Morgan showed a glimpse of his power-hitting against Kings XI Punjab. He smacked 40 runs off 25 balls in a highly critical game. Although, he ended up as the losing side skipper. Now, in do or die game, Morgan is expected to come up with something special in the next match.

Shubhman Gill has all the potential required to be the best and he has proved it on numerous occasions. He is coming with an amazing fifty on his back and will look to continue with the same form against three times IPL winner Chennai Super Kings.

CSK vs KKR Dream11 Prediction: Who will win the match

We have given an edge to Chennai Super Kings over Kolkata Knight Riders in the next affair of IPL 2020. The former registered a convincing win over their opponent and looked like the old Chennai Super Kings. Moreover, they have nothing to lose as they have already been knocked out from the tournament. So, the fans might get to watch a totally different game from the yellow army. On the other hand, KKR, who is still in the race of playoffs, will be concerned about the inconsistency of their batsmen. And, if they failed to rectify that issue then KKR might suffer a much-needed defeat in a must-win game.