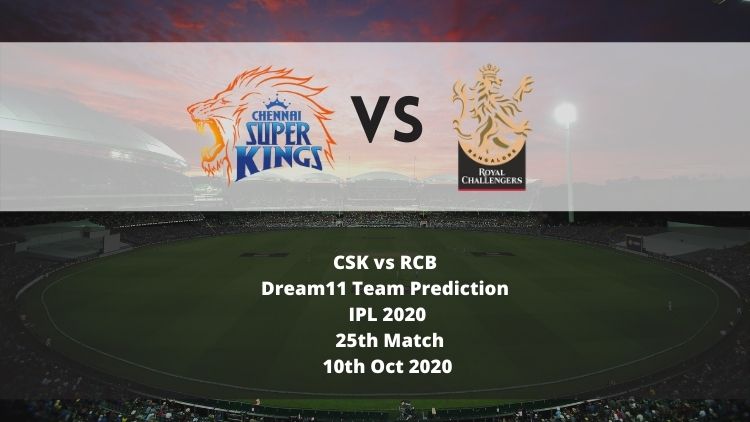 Chennai Super Kings and Royal Challengers Bangalore will take the field against each other in the 25th affair of IPL 2020. On one side, former IPL winner finding out the ways to gain consistency as their players are out of form. Meanwhile, Royal Challengers Bangalore is having a good season with their batsmen and bowlers performing well. RCB is currently on 5th position with three wins in five games. And, they will eye to gain their position in the league table. So let’s look at our CSK vs RCB Dream11 Team Prediction, Top Captain & Vice-Captain Picks, Head to Head, Grand League, and Fantasy Tips.

Head to Head for CSK vs RCB:

The pitch helps the batsmen to notch good scores in the early half of the match. But, they will have a tough batting in the second half of the game. This is the basic trend followed in IPL 2020 at this venue. Coming on toss, the side winning it will certainly look to bat first in order to take the advantage of the batting friendly conditions.

Virat Kohli has begun with his run-scoring spree. He is gaining momentum with each passing game and turning out to be the biggest threat for the opponent. He is expected to make the mockery of the CSK’s weak looking bowling unit with a dominance. So far, he has registered one fifty in the tournament and the second seems to be on the cards.

Shane Watson didn’t had the matches that everyone expected. But, now he is in swashbuckling flow with the bat and trying to bring his side on the winning track. He has registered back to back fifties in the tournament. And, chances are high that he will manage his 3rd in a row.

Faf du Plessis failed to score well against Kolkata Knight Riders. It was no less than a bad day for him as a batsman, But, their is always good day after a bad night in cricket. And, he will be in a mood to take the charge against the bowlers from the word go. He is currently the leading run scorer for CSK with 299 runs.

AB de Villiers also known as Mr. 360 Degree has played a couple of match saving knocks for his team in IPL 2020. He is one of the most sorted hard-hitting batsman in this tournament, who can turn the things around for his side in one go.

CSK vs RCB Dream11 Prediction: Who will win the match

Chennai Super Kings is struggling with the inconsistency of their top performers due to which they are facing the heat of the fans. And, the chances are slim that they can mark a good comeback on the winning track. On the other side, Royal Challengers Bangalore is looking like a different side. Their players are consistent, bowlers are doing well and batsmen are firing runs with the bat. Although, they lost the previous game. But, they will be confined to a good performance in the next affair.