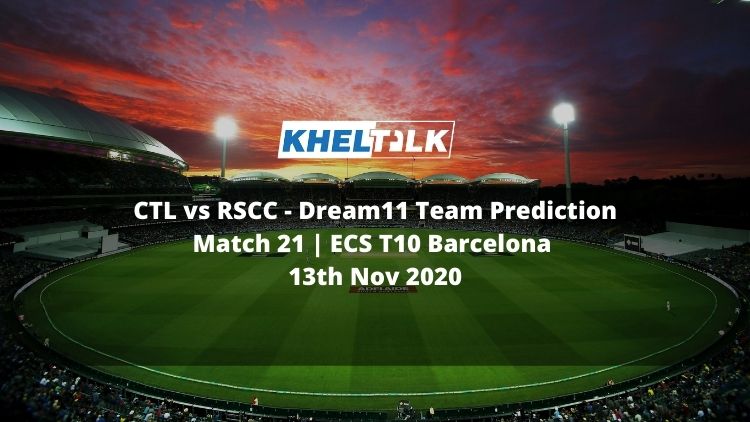 The 21st fixture of ECS T10 Barcelona will be played between Catalunya Cricket Club and Raval Sporting at Montjuic, Barcelona. Catalunya has won three out of four games and this makes them sit at the third spot of the table, while Raval Sporting is yet to play their opening game. They are at the bottom. So let’s have a look at our  CTL vs RSCC, Match 21 Dream11 Team Prediction, Top Captain & Vice-Captain Picks, Head to Head, Grand League, and Fantasy Tips.

The conditions at Montjuic will mostly favor the batsmen, pacers must come up with decent line nad length to chip wickets. Here average 1st innings score is 116 runs.

Ibrar Hussain has bagged eight wickets while playing four games. Having the best figure of 3/9, he has bowled at an economy of 7.42. Must be your side.

Yasir Ali missed the last game for Catalunya. Playing three games, he has scored 109 runs with the highest score of 94. He was seen hitting the ball at a strike rate of 187.93.

Nasir Shahzad has been another consistent bowler for Catalunya. In four matches, he has six wickets in his pocket in an economy of 9.16. He is expected to improve and concede fewer runs.

I Patel has been an x-factor player for Raval Sporting. In the last tournament of ECS T10, he kept his batting average around 27.0 and didn’t show any mercy to the bowlers, and was hitting the bat at a strike rate of 187.12

CTL vs RSCC Dream11 Prediction: Who will win the match

Catalunya looks in tremendous form and it not likely for an opening team to demolish their momentum. We bet on CTL to notch a victory here.