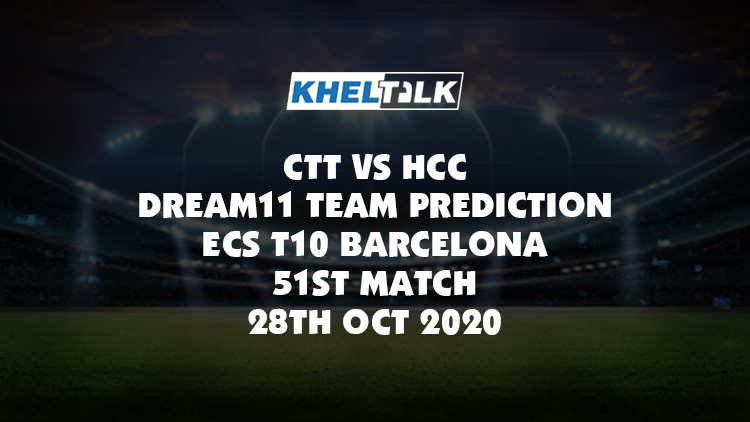 Catalunya Tigers CC would lock horns against Hawks Cricket Club in the 51st fixture of ECS T10 Barcelona 2020. Both the teams have struggled with his form and are yet to make their mark in the tournament. With just one win from 5 matches, Hawks are at the second last spot on the points table, while Catalunya is at 5th spot with two wins from five games. The match is scheduled to be played at Montjuic, Barcelona on 28th October. Here we have tried our best to provide you with the best CTT vs HCC Dream11 Team Prediction, Top Captain & Vice-Captain Picks, Head to Head, Grand League, and Fantasy Tips.

The surface has shown us drastic changes in these few days. Started as a perfect batting pitch, now it has completed turned in the favors of bowlers. Pacers will enjoy their time in these conditions.

Z Haider has spoken out loud with his bat and ball. Playing just two games, he has scored 69 runs at a strike rate of 168.29. Also, he has chipped six wickets in his 8 over spell so far. Don’t miss him out.

M Kashif is the second-highest wicket-taker for his side. Playing two games, he has five wickets scalped at an economy of 9.6. Although, he concedes a bt of runs, but is capable of chipping wickets on important intervals.

Umar Latif has been super economical with the ball for his side. Bowling at an economy of 7.12, he has bagged four wickets in two games. Don’t dare to miss him out.

CTT vs HCC Dream11 Prediction: Who will win the match

Catalunya Tigers have an upper hand right now. Having two wins in their pocket would have surely raised their confidence and will put in extra efforts to grab another victory here. We bet on Tigers to earn winnings points here.