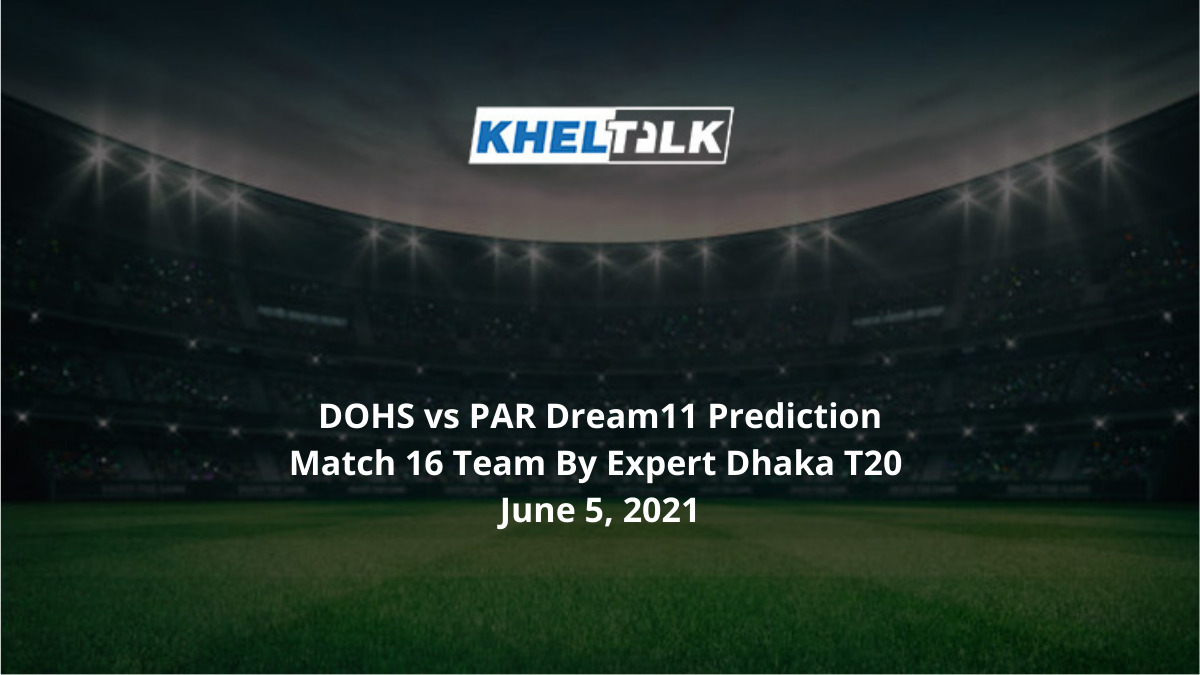 According to DOHS vs PAR Dream11 Prediction for Today’s Match Fantasy Cricket. Partex Sporting Club will take on Old DOHS Sports Club in Match 16 of the Dhaka T20 on Thursday, June 3, 2021, at the Shere Bangla National Stadium, Mirpur, Dhaka. Keep reading to find out about the Match 16 DOHS vs PAR Dream11 team today.

Partex Sporting Club will be hoping to give their campaign a fresh start here as they take on Old DOHS Sports Club. The team had lost both their matches so far and is in desperate need of a win. They are currently at the bottom half of the points table.

Old DOHS Sports Club, on the other hand, lost their previous match by D/L Method to Abahani Limited. The team went down by 22 runs. In their first match, the team had a good start with the bat before the rain took over to abandon the match. This means they are in need of a win, very badly.

The venue is more of a neutral one where both bowlers and batters have something to enjoy. However, due to rain, the batting gets tougher as the game progresses. The average first innings score at the moment is 153 and the team batting second have won most of the matches so far.

The rain is on cards on Saturday at Dhaka. According to the forecast, there is a huge possibility of thunderstorms. One can only hope for the best here. The temperature will be around 33 degrees Celcius for the most part of the day and there is a 60 per cent chance for the rain.

On papers, the team has one of the best batting line-ups here, thanks to the international players. However, the team couldn’t beat the former champions Abahani Limited in the last contest. As they will look to bounce back here, all eyes will be on Anisul Islam Emon.

The team couldn’t open their account so far. They went down in both matches and are likely to go down here as well. Though they have good number of talent, not many players are currently in good form. The team will depend more on their bowlers here.

Abbas Musa is an important pick here because of his aggressive nature. The Partex Sporting Club batter averages close to 42 in the tournament at the moment and has a strike rate close to 150. He has seven sixes to his name so far.

Anisul Islam Emon will be batting at the top and will also roll his arms for a couple of overs. He has scored 45 runs in the tournament so far and also has picked a wicket. Though he isn’t an attacking batter, one can rely on him for a good cameo.

Tasamul Haque is the best batter available here. He so far has played two matches and has scored fifties in both matches. He has 124 runs with a strike rate close to 113 while averaging 124 in the tournament at the moment. He also has 3 wickets to his name.

Mohaiminul Khan will be bowling his full quota here and can be trusted for early wickets. He has an economy rate lesser than seven, 6.25 here and has a couple of wickets to his name. He will be keen to add more wickets to that tally and is useful with the bat too.

Who Will Win Today Between DOHS vs PAR Dream11 Prediction, Match 16?

According to Kheltalk’s astrology DOHS vs PAR Dream11 match Prediction, Team DOHS are likely to win this match. The team looks better on papers and it is unfortunate that both their matches were affected by rain. This is an excellent chance for the team to open their account here.

According to Kheltalk’s DOHS vs PAR Dream11 toss prediction, PAR is likely to bat second here. Since rain is on cards, both teams will be eager to win the toss and opt to bat second today. However, DOHS are comparatively better team and they are likely to win here irrespective of the toss result.