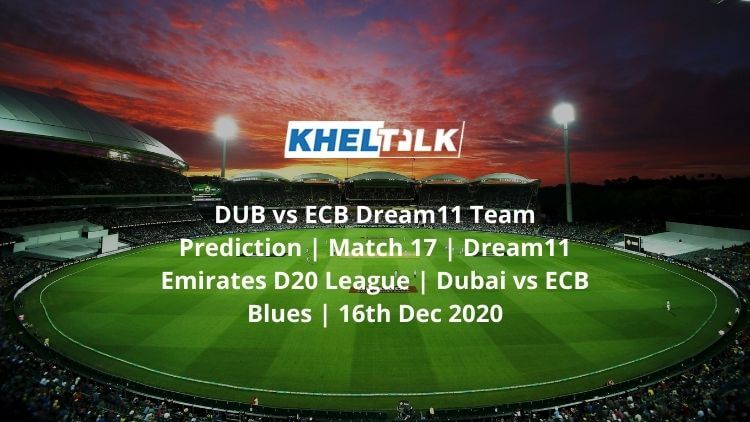 ECB Blues will take on Dubai in the 17th match of the tournament. As of Monday, ECB Blues have won 3 out of their 4 matches and have lost one. They are currently at the 2nd position and their loss came against the table-toppers Fujairah Pacific Ventures. On the other hand, Dubai has won two and has lost two matches. They are at 3rd position. When these two teams met earlier in the tournament, ECB Blues won the match by seven wickets. Let’s go through our Dream11 Team Prediction for the upcoming game between ECB Blues and Dubai.

The conditions at ICC Academy has something for both batsmen and bowlers. Going by the previous matches, one can see that the pitch seems to improve as the match progresses and the batting gets easier, especially in the 2nd innings.

Total matches played so far in the tournament- 12

Vriitya Aravind is one of the popular choices for the captain in fantasy cricket. While he is yet to score big in the tournament, he smashed 83* from just 29 deliveries in D10 League a few months ago. The knock had 7 fours and 7 sixes.

The all-rounder Aryan Lakra is yet to perform big with the bat but is doing a brilliant job with the ball. He so far has 10 wickets from his four outings and has an economy rate of 5.24. He has a five-wicket haul and a four-wicket haul in the tournament.

Omer Farooq is a lone warrior for Abu Dhabi so far. He has bowled well, fielded well and also added useful runs to the scoreboard. He so far has five wickets to his name.

Tahir Latif has been consistent throughout the tournament and has picked up ten wickets so far which includes a four-wicket haul as well.

DUB vs ECB Team11 Team Prediction: Who will win the match

ECB Blues will begin the contest as the favorites here but the team tends to experiment more. This might not work and the team might end up losing as well. Recently, they opened with Aryan Lakra which back-fired for them. Dubai, on the other hand, will be looking to chase the target as they have a strong bowling line-up. Our Dream11 Team Prediction experts feel it is going to be a reckless game between the aforementioned sides.