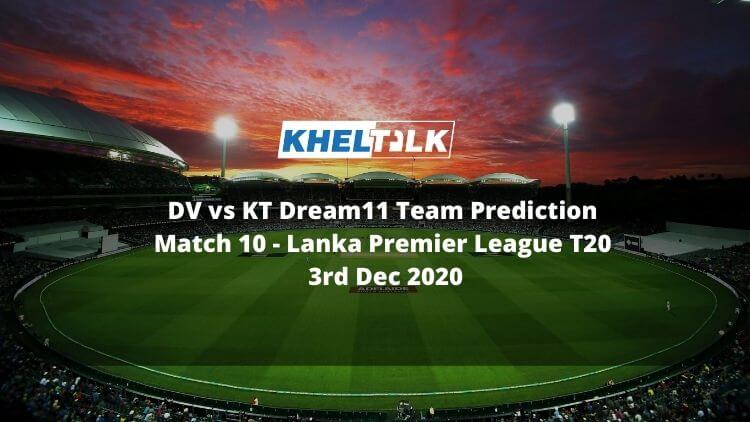 With just 1 win in 4 games, Kandy Tuskers are having a tough time in the Lanka Premier League 2020 and they need crucial points to keep their campaign alive. And with this pursuit, they meet Dambulla Vikings on 03rd December. Dambulla is better placed in the points table as they have won 2 of their 3 games and are at number 3 in the points table. Let’s go through our Dream11 Prediction for the upcoming Lanka Premier League game between DV and KT.

The pitch has offered plenty of assistance for the batsmen. There is something for the bowlers in the initial overs but after that, the wicket will become too good to bat.

B Taylor has continued to impress with his batting. He scored 50* in his first innings and then made another 46* from just 32 balls in his second innings. Taylor now has scored 97 runs in 2 games and has made vital contributions in the middle order. Considering his experience and form he is the perfect choice for captain.

Naveen ul Haq has been very consistent with his bowling in this tournament. He has claimed 8 wickets in 4 games. He picked 3 wickets for 44 runs in the last game and made great use of the conditions. Importantly he has picked a wicket in every match he bowled so far in this LPL and hence he is a must-have bowler in the team.

D Shanaka has been the most consistent batsman for his team in this LPL. He has scored 3 vital innings in this league. He made 73 against Tuskers in the first match, then added 35 runs in his second game, and then in the last game, he made 56 runs against Kings. So now he has 164 runs in 3 games with 2 fifties in 3 innings.

S Patel has been very impressed with his all-around performances. He has scored 129 runs in 3 innings so far and has batted with responsibility in the middle order. At the same time, he has made great contributions to the bowling department. He has taken 4 wickets in 3 games. His all-round performances make him a good choice for vice-captain.

DV vs KT Dream11 Prediction: Who will win the match

Dambulla has got their key players in form and their all-rounders are making great contributions. So in this match, Dambulla Vikings will win the game.