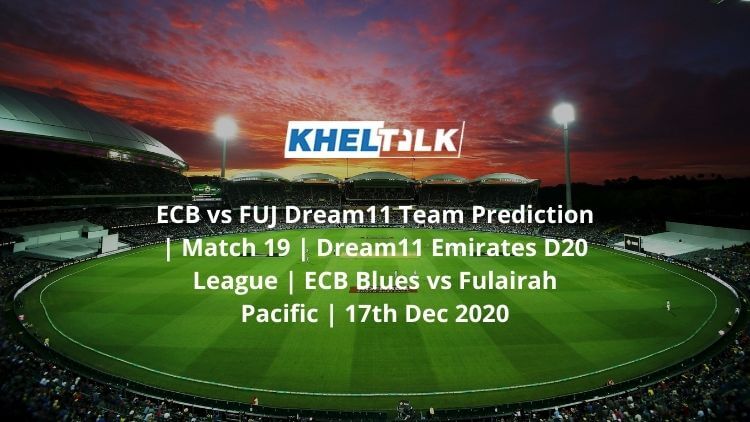 ECB Blues will take on Fujairah Pacific Ventures in the 19th match of the tournament. Fujairah is still unbeaten in the tournament and have won five matches in a row.

On the other hand, ECB Blues are placed at 2nd position just below Fujairah with four wins from five matches. Their only loss came against Fujairah earlier in the tournament.

Earlier when these two teams met, Fujairah chased down 135 runs with ease and won the match by 6 wickets. Let’s go through our Dream11 Team Prediction for the upcoming game between ECB Blues and Fujairah Pacific.

Going by the recent matches, the teams batting first have won most of the matches and whoever wins the toss here will look to bat first. Also, we might witness some high octane contest considering the form of both the players.

Total matches played so far in the tournament – 15

Vriitya Aravind is one of the popular choices for the captain in fantasy cricket. He is the leading run-scorer for ECB Blues with 157 runs with an average close to 32 and a strike-rate close to 128.

Aaryan Lakra is the leading wicket-taker of the tournament at the moment. He has 14 wickets to his name from five outings with two four-wicket hauls and a five-wicket haul to his name.

Usman Khan has scored 192 runs in the tournament so far and is the 2nd leading run-scorer for his team. He has 23 fours and 3 sixes. He averages close to 48 and has two fifties to his name.

ECB vs FUJ Team11 Team Prediction: Who will win the match

Both the teams are in great form in the tournament and this match is likely to go down the wire. The team FUJ has an upper hand here as they have already beaten the team ECB earlier in the tournament. For ECB, a lot depends on their all-rounder Aaryan Lakra who is doing extremely well with the ball.