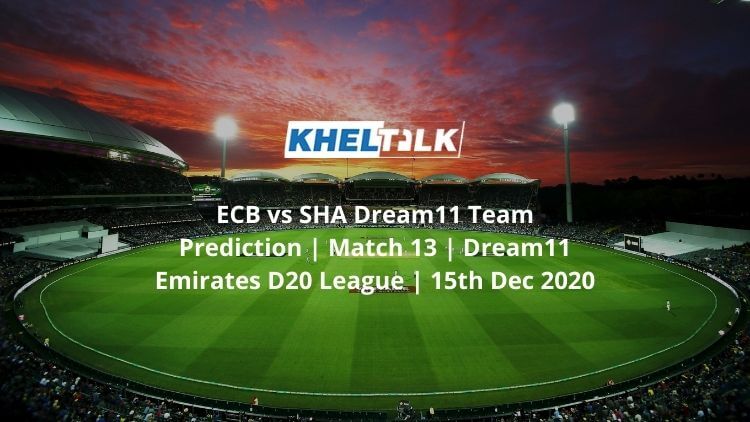 Sharjah Bukhatir XI will take on ECB Blues in the 13th match of the tournament. Both the teams are looking good so far with ECB Blues winning three out of their four matches and are at the second position. Their only loss came against the table-toppers Fujairah Pacific Ventures. On the other hand, Sharjah Bukhatir XI has won two out of their three outings and are in the 3rd position. Their loss also came against Fujairah Pacific Ventures. Let’s go through our Dream11 Team Prediction for the upcoming game between ECB and SHA.

The conditions at ICC Academy has something for both batsmen and bowlers. Going by the previous matches, we could see that the bowlers have enjoyed the initial phases of the game and the batsmen have struggled with the timing during that phase. However, the batting got better in the latter part of the innings.

Total matches played so far in the tournament- 12

Vriitya Aravind is an attacking batsman and can change the course of the game single-handedly. A few months ago, he smashed 83* from just 29 deliveries in D10 League.

The all-rounder Aryan Lakra is doing a brilliant job with the ball. He so far has 10 wickets from his four outings and has an economy rate of 5.24.

Karthik Meiyappan is a promising bowler and is doing well with the ball. He has five wickets from his four outings so far and has an economy rate lesser than 7.

ECB vs SHA Team11 Team Prediction: Who will win the match

Both the teams are doing well currently in the tournament and the match could go either way. However, ECB Blues will be looking to bat second here as bowling is their weakest link. On the other hand, Sharjah Bukhatir XI looks like a well-balanced side and has bounced back well after losing their first match. Our Dream11 Team Prediction experts expect it to be a nail-biting encounter.