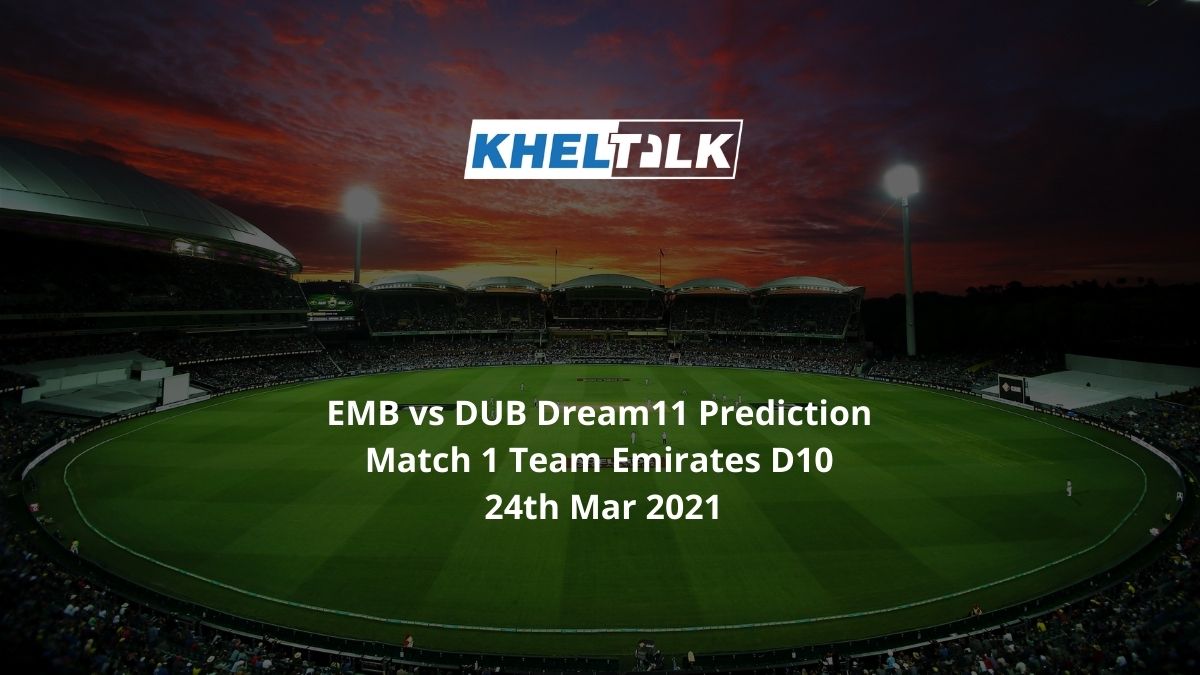 Dubai Cricket has announced the second edition of the Emirates D10 after a successful first edition. UAE’s top five teams along with Emirates Blues – formed by Emirates Cricket Board will compete in a 33 match tournament. The inaugural Emirates D10 tournament was won by ECB Blues by six wickets overs Fujairah Pacific Ventures at Dubai International Stadium.

Talking about head to head between these two sides, both the teams have won one match each. In the last two years, Emirates Blues have won 8 out of 12 games, while Dubai could only manage to win four games out of 11. In the last edition, Blues ended up being on the second spot with seven wins in 10 games, while Dubai got stuck on the 4th spot with just four wins in the tournament.

Here are the stats for the teams EMB vs DUB:-

According to the last five matches at this venue – the team batting second has two more games, so the team winning the toss will opt to bowl first. Pacers are more effective at this venue, while the spinners have to put a bit to trouble the batsmen. The average inning score at this venue is around 121.

Well according to the weather report, the maximum temperature is supposed to be 32 degrees on 25th March. In the same week, the minimum temperature will be around 21 degrees on 24th March around 1 am. Looking at the radar, little or no rain is expected over this week. The windiest of all days will be Monday 22nd March as wind will reach 20mph or 32kmph at around 4 am.

Make sure you don’t play many spinners. The surface mostly favors the pacers, so choose wisely and go with the combination of 6:5.

Emirates Blues will step up with their best combination in the opening game of the tournament. The team would be in high spirits having the likes of C Rizwan and Aryan Lanka to their side.

Team Dubai will be hoping to perform better this season as in the previous edition, they ended up on the fourth spot with just six wins in 10 games. Adhitya Shetty and Fahad Nawaz have played some good cricket for the side and can be impactful.

Fawad Nawaz has not only impressed with his batting skills but has got some troubling variations with the ball. In 11 games, he has scored 26 runs along with chipping 8 wickets at an economy of 11.25. He will surely earn you points. Don’t miss him out.

M Boota has earned respect playing for Blues. In 12 D10 innings, he has scored 147 runs at an average of 16.33. Coming top the order, he will try to score as much run possible so that he can gives enough handy to te batsmen coming down the order. He will surely be impactful.

Adhitya Shetty was extremely lethal with the ball in the last edition of D10. Playing just four innings, he chipped 8 wickets at an impressive economy of 5.50. Shetty will surely make it difficult for the batsmen to score runs in his spell.

M Azhar of Blues was seen chipping wickets from one end but couldn’t stop the batsmen from scoring runs in his speel. In six innings, he bagged five wickets which makes him the highest wicket-taker in the team.

Chundangapoyil Rizwan is another reliable asset in Emirates Blues who can do wonders with both bat and ball. In 12 innings for Blues, he has scored 118 runs at an average of 23.60 and has two wickets to his name.

Here is the Dream 11 Team prediction for EMB vs DUB. We are going with players who are currently in good form and can win the match with ease.

Head To Head Team For Emirates Blues vs Dubai

Who Will Win Today Between EMB vs DUB Dream11 Prediction, Match 1?

According to Kheltalk’s astrology EMB vs DUB Dream11 match Prediction, EMB will win the match. As mentioned above, Blues have has much better record as compared with Dubai. Blues have a 100% successful rate when it comes to batting second, while Dubai has lost has a successrate of 43%.

According to Kheltalk’s EMB vs DUB Dream11 toss prediction, EMB will win the toss and will opt to bowl first. Going by the record, the team batting second has won more games at this venue.