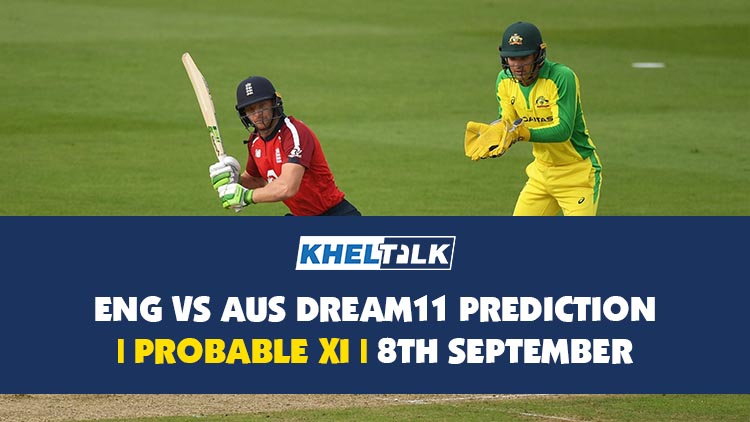 ENG vs AUS, Australia tour of England, Dream11 Prediction :
In the three-match T20I series between England and Australia, the former has already taken a lead over the visitors by 2-0. Now, we are here to analyze and tell our followers about the best ENG vs AUS Dream11 Prediction, Probable Playing XI, and Fantasy Cricket Tips for the third and final game of the series that will be played at The Rice Bowl at Southampton.

England has outclassed Australia with sheer dominance in the ongoing T20I series. They have taken a consolidated lead over the visitor’s by 2-0. And, now, they will have an aim to win this 3-match series by 3-0. In the series opener, they marked a close win by 2 runs. Followed by their thumping victory in the 2nd game by six wickets.

The hosts will be coming with a winning momentum on the back of their in-form players, who have outperformed Australia on every single occasion in this series. Jos Buttler, Dawid Malan, and Eoin Morgan will play an important role with the bat. And, if they performed well then England will surely manage a whitewash by winning the final game of the series.

Australia has performed well in the ongoing 3-match T20I series against England. But, they have failed to utilize the opportunity during crucial moments of the game. This is the reason they lost the series opener by 2 runs. In that particular game, they had a great opening partnership of 98 runs while chasing a target of 162 runs.

However, they still failed to cross the finishing line. The visitors’ followed the same trend in the 2nd T20I due to which they have already lost the series to their arch-rivals. Now, the fans will be expecting that Australia should mark a strong comeback in the third and final game of the series.

Buttler is making the most out of the opportunity against Australia. After a tough Test series against Pakistan, he has certainly acquired his form in the shorter format from the very first game. So far, he has scored 121 runs from two games. And, he can be picked captain or vice-captain of any Grand League or Small League in the Dream11 Prediction game.

David Warner is undoubtedly a perfect match-winner in the shorter format of the game. If he gets going then it is next quite impossible to stop him. He is a small dynamite, who can single-handedly win games for Australia. In the series open he played a respectful knock of 58 runs off 47 balls in tough batting conditions. Now, he will look to end his campaign with a bang-on performance against the hosts’.

Dawid Malan has impressed everyone with his convincing batting form in the ongoing T20I series against Australia. He has scored 108 runs in two innings at an average of 54. He has also managed a brilliant fifty in the series opener. This is the reason, we have picked him as one four choices in the captain/vice-captain category for the Dream11 Prediction fantasy team.

Kheltalk has analyzed every aspect of England and Australia. Now, we have come to the conclusion that AUS might manage a strong comeback by winning the final game of the three-match T20I series. Aaron Finch and Co. has the calibre to bounce back strongly with an emphating effort. Moreoever, they have some big names with an ability to win the games single handedly in the shorter format