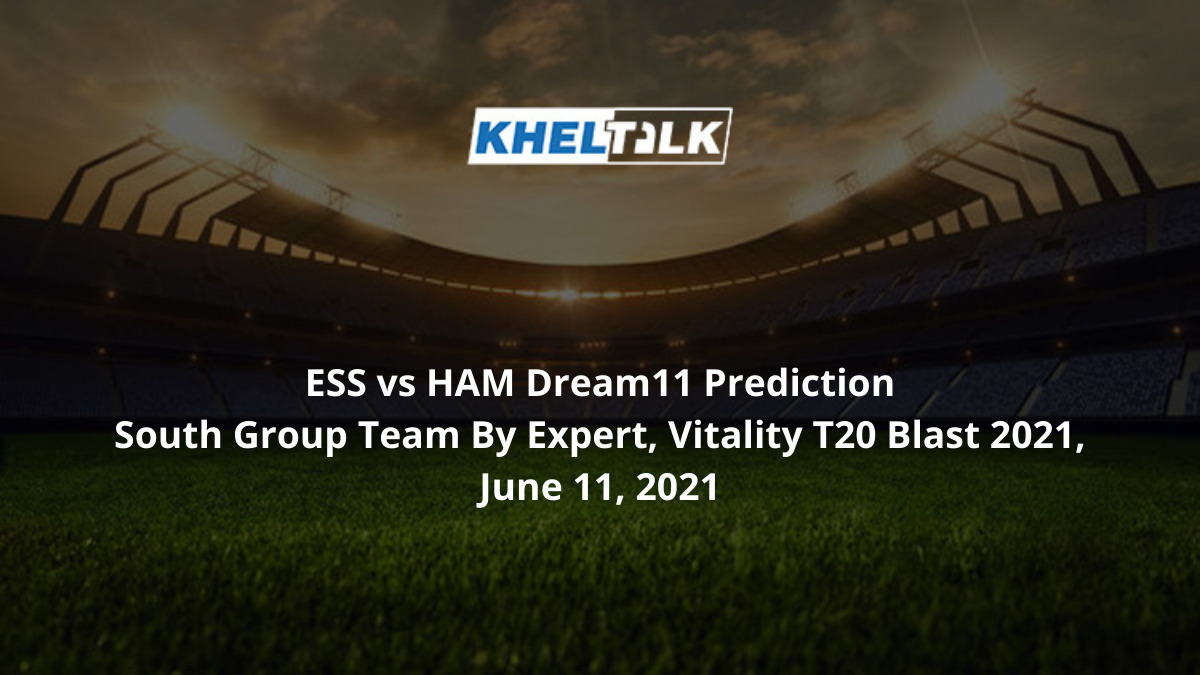 Welcome to ESS vs HAM Dream11 Prediction for Today’s Match Fantasy Cricket. Essex will take on the Hampshire in the South Group Match of the Vitality Blast on Friday, June 11, 2021, at County Ground, Chelmsford. Keep reading to find out about the Vitality Blast ESS vs HAM Match Dream11 team today.

Essex and Hampshire had a contrasting start to the tournament. Essex pulled off a thrilling victory over Somerset the other night while Hampshire fell through against Kent.

Essex once again showed their batting depth on Wednesday when they had managed to win their contest by just three wickets. While chasing a massive total of 185, Essex found themselves at 47 for 3 at one point. Soon, James Neesham made sure to take the team home while batting at number six.

On the other hand, Hampshire had no answers to Kent bowlers who were not only economical but also had wickets at regular intervals. Fred Klaassen did most of the damage to the team with the ball as he ended up picking four wickets.

The County Ground at Chelmsford will support the batters more. The toss isn’t going to be a big factor here. Out of 37 matches, 19 of them went to the team chasing while 17 went to the team batting first. The highest score at this venue is 226 by Essex and the average first innings score is 178.

On paper, the team’s batting looks solid, thanks to the presence of James Vince, D’Arcy Short among others. However, they did have a forgettable night against Kent and will look to bounce back at this contest.

Led by Westley, the team will be hoping for a good performance from their top order today. Though they had won their last contest, it didn’t come in the way they would have wanted though they would take it. James Neesham will be the player to watch out for once again.

James Neesham is more of a mandatory pick on the fantasy side. The Kiwi all-rounder proved his worth by smashing a brilliant fifty in the last contest. He played a major role in helping the team win in that contest by scoring 53 from just 25 deliveries.

Liam Dawson will look for a better start with the bat in this contest. He is capable of contributing from both fronts and in the last match, he ended up scoring only nine runs but had managed to make up for the same by picking up a wicket.

James Vince will look to lead the team from the front in this contest. He will be opening the innings in this contest and in the last match, he had managed 34 runs from his 30 deliveries. The knock had three fours. One can expect a similar performance from him today.

D’Arcy Short is the most popular pick for the captain in this contest. The Australian all-rounder had 29 runs from 19 deliveries with six fours to his name. In his T20 career, he has 3378 runs with an average close to 37 and has a strike rate close to 138.

Mason Crane was the stand-out performer with the ball in the last contest. He had three wickets to his name while giving away just 23 runs.

Joe Weatherley will play the finishing role in this contest. In the last match, he had a good start but couldn’t convert them to big score. He smashed 37 runs from just 22 deliveries.

Paul Walter batted well for his 45 in the last match. He took just 30 deliveries and the knock had five fours and a six. He is our trump card today.

Simon Harmer will be the player to watch out for here. The bowling all-rounder had managed to pick up a wicket in his last match and is likely to dominate here as well.

Who Will Win Today Between ESS vs HAM Dream11 Prediction, South Group?

According to Kheltalk’s astrology ESS vs HAM Dream11 match Prediction, Essex are likely to win this contest but the match is expected to be a close one. When these two teams met earlier in the last edition, Essex had won the match by 54 runs.

According to Kheltalk’s ESS vs HAM Dream11 toss prediction, Essex is likely to bowl first at this venue. Though the toss doesn’t change much, Essex would prefer to chase here because they had won their last match while chasing.