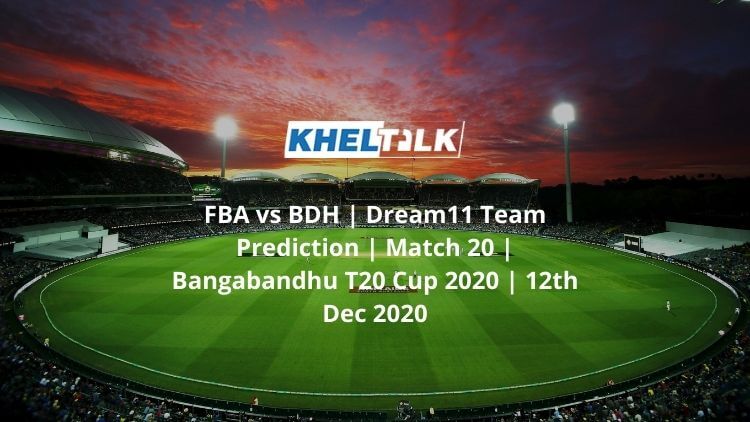 In the final league match of the tournament, Fortune Barishal will lock horns with Beximco Dhaka. This match is important for both the teams as a win here can take Beximco Dhaka to the 2nd place, ahead of Gemcon Khulna. Fortune Barishal who are currently in the last position can still make it to the playoffs if they manage to win this match and if Minister Rajshahi loses their final league game against Gazi Group Chattogram. Let’s go through our Dream11 Team Prediction for the upcoming match of the Bangabandhu T20 Cup.

After 20+ matches, the pitch is almost a dead track. The batsmen are finding it easier to score runs compared to earlier. We recently saw Fortune Barishal chasing down 221 against Minister Rajshahi in just 18.1 overs.

Total Matches in the tournament so far– 18

Tamim Iqbal is the 2nd leading run-scorer of the tournament currently. He averages 47.16 in the tournament and has 283 runs while striking at 119.91 runs per over.

Mushfiqur Rahim has had starts in almost every single game but has converted it to a half-century only once. He has 214 in the tournament so far with an average close to 43 and a strike-rate close to 114.

After a few cameos to his name, Parvez Hossain Emon showed what he is capable of when he scored the ton and helped the team to chase down a mammoth total with ease against Minister Rajshahi. He has 218 runs in the tournament with the strike-rate close to 142.

Muktar Ali is one of the popular choices for the vice-captain in the fantasy team. He has picked up 12 wickets with an economy rate of 8.68 and has 52 runs to his name.

FBA vs BDH  Dream11 Team Prediction: Who will win the match

While the team BDH will begin the contest as the favorites, one cannot just rule out the team FBH who have already proved that they can pull off unbelievable chases with ease. Nevertheless, this match will be an exciting contest. Our Dream11 Team Prediction experts expect it to be a close affair between two star-studded sides.