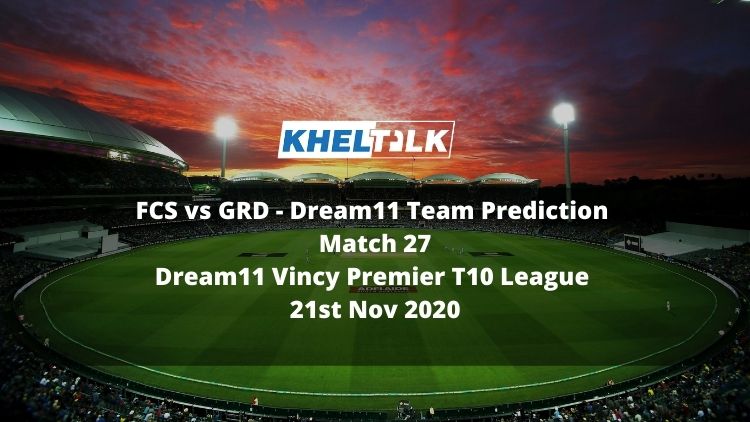 In the 27th match of the Vincy Premier League, Fort Charlotte Strikers take on the challenge of Grenadines Divers on 21st November. Both the teams have won only 2 games each and hence their chances of making it to the next round are slim so they will be keen on finishing the campaign on a high note. So let’s have a look at our  FCS vs GRD Match 27 Dream11 Team Prediction, Top Captain & Vice-Captain Picks, Head to Head, Grand League, and Fantasy Tips.

The batsmen have enjoyed batting on the surface as the ball comes nicely on the bat. The bowlers will have to bend their backs to make an impact.

T Theophile is a very critical all-rounder as he contributes with the bat as well ball. He took 4 wickets for 9 runs against FCS and has been very effective with the bat as well. He has scored 53 runs in 4 games and in the last match he scored 19 runs off 10 balls.

Shem Browne has been the Mr. Consistent for his team and has scored runs in every game he has batted so far. He has scored 90 runs in the last 5 games. Browne scored 33 runs from 27 balls in the match against LSH. He is technically sound batsman and can be expected to more runs in this game as well.

A Hooper is a must-have player in the team as he is a handy batsman and can roll his arm and produce wickets as well. He has claimed 2 wickets in the last 2 games and has bowled tidily which has made him a dangerous bowler. However his main role is in batting where he has scored 112 runs in the last 5 games which includes one fifty against FCS.

FCS made R Walker to open the innings in the last game and he seized the opportunity with both hands by scoring 28 runs from 13 balls. He is a very aggressive batsman and can make great use of the Powerplay overs. He looked in great touch in the last match and hence can be expected to inflict more damage in this match as well.

FCS vs GRD Dream11 Prediction: Who will win the match

Considering the form of their top-order, FCS seem to be the better team in the contest and they will win this game.