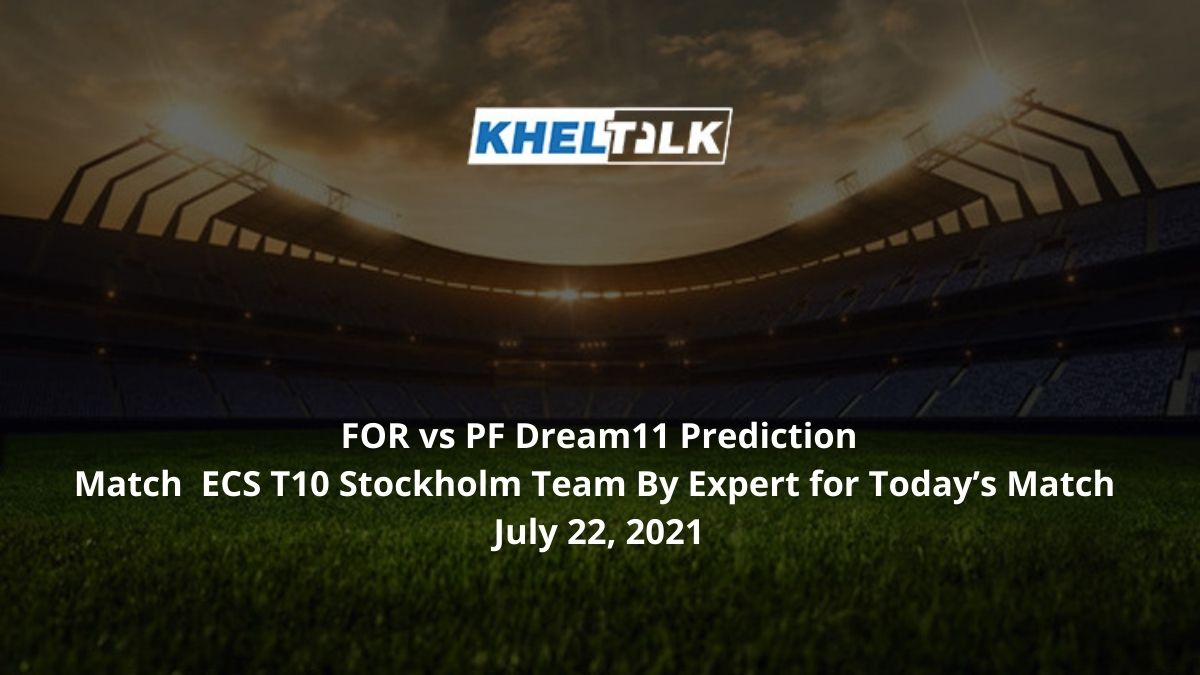 Forenom Royals has been inconsistent throughout the tournament and as a result, they find themselves at the fourth spot in the points table. They so far have won two matches and have four points to their name. Both their wins came in a close contest. Their first win was decided through Golden Ball and in their 2nd match, they won by just two runs.

They will meet the top team in this tournament at the moment, Pakistanska Forening. The team is yet to lose a match and are at the top of the table with five wins in a row. The team will begin this contest as favorites today.

FOR vs PF Dream11 Match Prediction

Going by what we have seen so far, this is a good batting track with some support to the pacers early in the innings. Most of the teams have preferred batting first as the pitch tends to get slower in the second half of the game.

It is going to be a cloudy day in Stockholm on Thursday. The temperature will be around 21 degrees Celcius for the most part of the day and is likely to go up to 26 degrees Celcius during noontime. According to the forecast, there is a slight chance for drizzles here.

With a plethora of stars in the team, Forening is in a good position at the moment. Faraan Chaudhary has been the star with the bat for the team while the skipper Bilal Muhammad has done well with the ball and is the most consistent contributor for the team.

While the team is yet to win matches consistently, they were a few honorable performances here. Arpit Tiwari has been a revelation with the bat. Anirudh Ram surprised everyone with his aggressive hitting. Srini Jettiboyina has been the star with the ball and most importantly, the skipper Rohit Juneja is in great form at the moment.

Anirudh Ram is in excellent form at the moment. He made heads turn with a brilliant half-century recently. The opener has 93 runs with a strike rate of more than 160. He will also keep wickets here and has done well with the gloves so far.

Arpit Tiwari is a potential candidate for the MVP award in the tournament. The all-rounder is the current leading run-scorer for his team and is among the wickets too. One can expect him to carry his good form into this contest as well.

The youngster Faraan Chaudhry has scored the maximum runs for his team at the moment. He is in decent form with an average close to 22 and a strike rate close to 152. He is certainly one of the most improved players here.

Zubair Aslam’s spells in this tournament have been outstanding so far and is fittingly the top wicket-taker in the tournament. He so far has eight wickets while giving away just five runs per over. He will be leading the bowling attack for the team here.

The skipper Bilal Muhammad is the most experienced player in the line-up. He had made sure to lead the team from the front and is the second leading wicket-taker of the tournament at the moment. He so far has picked up seven wickets while giving away 4.77 runs per over.

Head to Head Dream11 Team Prediction FOR vs PF

Wicket-keepers:  A Ram, U Chaudhry

Who Will Win Today Between FOR vs PF Dream11 Prediction, 16th match?

According to Kheltalk’s astrology FOR vs PF Dream11 match Prediction, Pakistanska Forening will begin this contest as favorites. The defending champions are looking better in all aspects compared to their opponent and thus, they will be looking for a big finish here.

FOR vs PF Toss Prediction today

According to Kheltalk’s FOR vs PF Dream11 toss prediction, Pakistanska Forening will win the toss and will opt to bowl first here. Since the pitch will not change much for the second innings, they are likely to chase here.