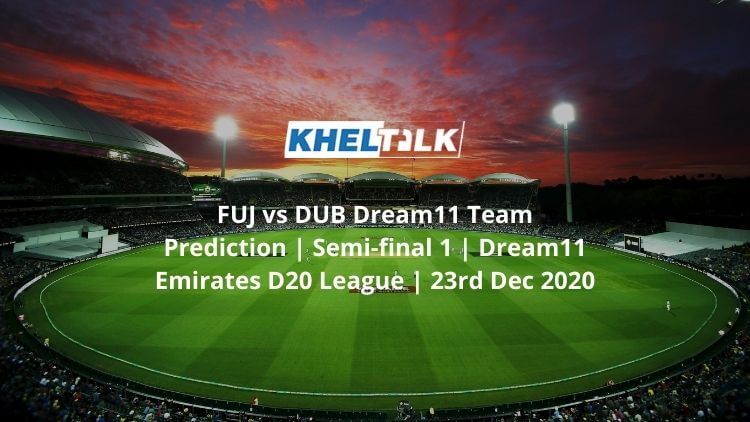 Fujairah Pacific Ventures will take on Dubai in the 1st semi-final of the tournament. Fujairah, undoubtedly, is the best side in the tournament and are still unbeaten here. They have managed to win 10 matches in a row with ease. They weren’t even tested in the tournament, it was all straight-forward.

On the other hand, Dubai has been inconsistent throughout the tournament. They ended up at the 4th spot in the points table with 4 wins and 6 losses. Though they haven’t won much, Dubai is certainly a team to watch out for here as they have the ability to win over any team. Let’s go through our FUJ vs DUB Dream11 Team Prediction for the upcoming game of Dream11 Emirates D20 League.

Going by the matches in the tournament, the pitch has assisted both the batsmen and bowlers in phases. A lot depends on the first session of the play. However, nothing has seemed to work against the team FUJ as both their openers are in terrific form and have finished off most of the matches.

Highest score in the tournament so far- 186

Total matches played so far in the tournament – 30

Fujairah is the best side and everything seems to click for them in the tournament. Both their openers, Mustafa and Muhammad are doing extremely well and Usman is making sure to finish the matches for the team. With the ball, Rao is making it all work and there are other bowlers who have chipped in and made things work for them. This is the team news from Fujairah for FUJ vs DUB Dream11.

Despite winning four matches, Dubai is still the underdog in the tournament. They do have the star power but couldn’t really produce big knocks. They are dependent on Tahir Latif more and at times, it is back-firing them. In the last match, they had a few stars, including Piyush Mehra coming good at the right time. The team will be hoping for a similar performance here as well. This is the team news from Dubai for FUJ vs DUB Dream11.

Rohan Mustafa, undoubtedly, is the best choice for the captain. He has 312 runs from his 10 outings and also has 10 wickets to his name.

Waseem Muhammed has an average close to 62 here and has been the stand-out performer in the tournament. He has 494 runs from his 10 outings with 4 fifties and a ton to his name. He has a strike-rate close to 148.

Punja Mehra was the star performer for Dubai in the last match. He had 42 runs and also had a wicket to his name. He so far has 137 runs in the tournament.

Bilal Cheema is the leading run-scorer for Dubai. He has 173 runs in the tournament so far with a strike-rate of 123.57.

FUJ vs DUB Team11 Team Prediction: Who will win the match

Fujairah is the overwhelming favorite to win this match. Dubai will have to bring in their A-game to defeat the team. A lot depends on their bowlers to keep the team quite early in the innings. Also, if Dubai could get rid of Mustafa and Waseem early, the team might stand a chance to win the match. However, if asked to pick one then as per our FUJ vs DUB Dream11 Team Prediction, Fujairah will win the game.