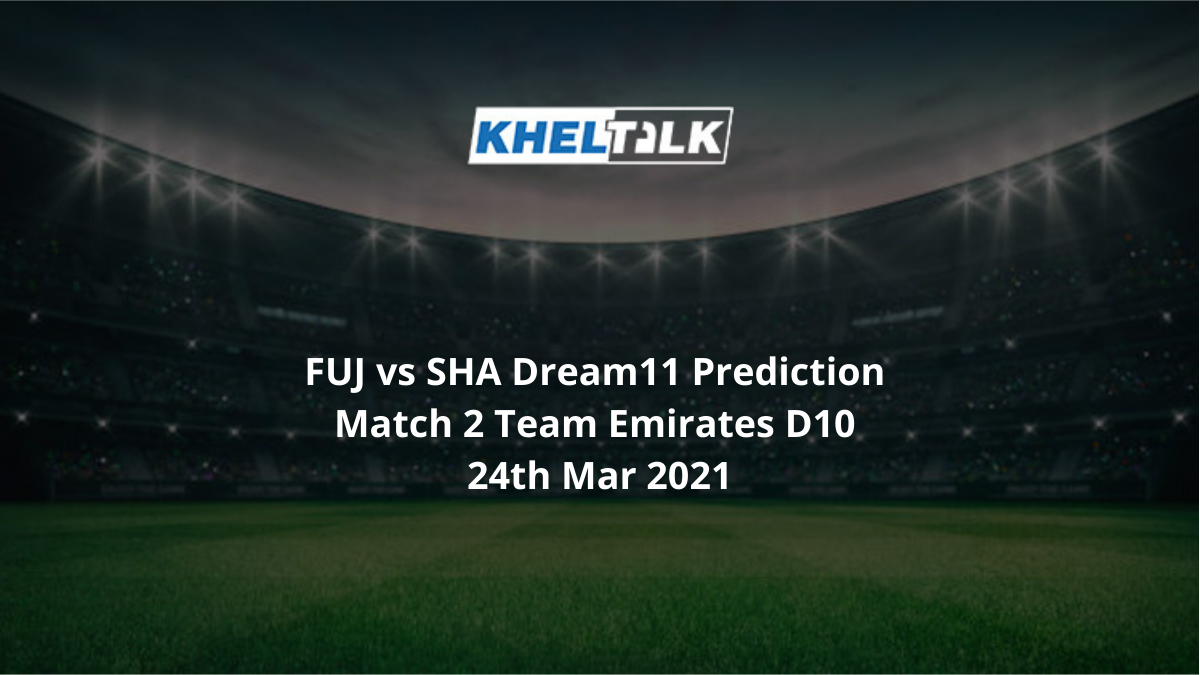 Fujairah will be aiming to clinch the trophy in this edition after they were thrashed down by Emirates Blues in the previous edition of the Emirates D10 tournament. On the other hand, Sharjah ended up in the 1st spot of the points table with 9 wins from 10 games but failed to reach the finals after losing to Emirates Blues in the play-offs.

Talking about head to head between Sharjah and Fujairah, these two teams have squared off against each other three times and Sharjah leads the race by 2:1.

Here are the stats for the teams FUJ vs SHA:-

According to the last five matches at this venue – the team batting second has two more games, so the team winning the toss will opt to bowl first. The surface is likely to act similar after the first game but a bit of dew might come into existence. Pacers are more effective at this venue, while the spinners have nothing to cheer about. The average inning score at this venue is around 121.

Well according to the weather report, the maximum temperature is supposed to be 32 degrees on 25th March. In the same week, the minimum temperature will be around 21 degrees on 24th March around 1 am. Looking at the radar, little or no rain is expected over this week. The windiest of all days will be Monday 22nd March as wind will reach 20mph or 32kmph at around 4 am.

Make sure you don’t play many spinners. The surface mostly favors the pacers, so choose wisely and go with the combination of 6:5.

Fujairah is stuffed with great talents like A Sharafu, Sanchit Sharma, and Waseem Muhammad. All these players played exceptional cricket last season and will surely step to do wonders in this edition as well. With six wins from 10 games, Fujairah sealed the third spot at the Emirates T20 2020 points table.

Sharjah was the table-toppers last season yet failed to win the play-offs which made them exit the tournament. Sharjah would be hoping to have a similar start this season as well. Having V Aravind, Rameer Shahzad, and Renjith Mani in their squad makes them the strongest side again.

Renjith Mani was outstanding in the last edition of the tournament. Playing 12 innings, he scored 339 runs off his bat and also chipped four wickets at an economy of 8. He can be impactful again this season.

Waseem Muhammad was the highest run-getter for the Fujairah in the last edition of Emirates D10. In 13 innings, he scored 453 runs at an average of 41.18 along with two wickets to his name. His hitting ability can turn around the game at any moment.

Umair Ali contributed well with the bat as well as with the ball. Not only he bagged 16 wickets in the tournament but also scored important 187 runs in 12 innings. His stats speak a lot about his skills so don’t miss him out.

Sanchit Sharma chipped 15 wickets for Fujairah in 13 innings but was a bit expensive with the ball. Hopefully, this season he keeps his spell tight and chips more wickets than last year. he will surely help you earn points.

Alishan Sharafu has scored 233 runs in 13 innings and has even got four wickets to his name in the previous tournament. He can be your X-factor player.

V Aravind was the highest run-getter for Sharjah in the last edition of the tournament. In 12 innings, he slammed 358 runs at an average of 39.77 and made himself the most valuable player of his team last season. He will surely not disappoint you.

Here is the Dream 11 Team prediction for FUJ vs SHA. We are going with players who are currently in good form and can win the match with ease.

Head To Head Team For Fujairah vs Sharjah

Who Will Win Today Between FUJ vs SHA Dream11 Prediction, Match 2?

According to Kheltalk’s astrology FUJ vs SHA Dream11 match Prediction, SHA will win the match. Seeing their history, Sharjah stands ahead for Fujairah. Having a better line up is clearly an advantage and Sharjah will put in all efforts to open their account in the tournament

According to Kheltalk’s FUJ vs SHA Dream11 toss prediction, SHA will win the toss and will opt to bowl first. Going by the record, the team batting second has won more games at this venue.