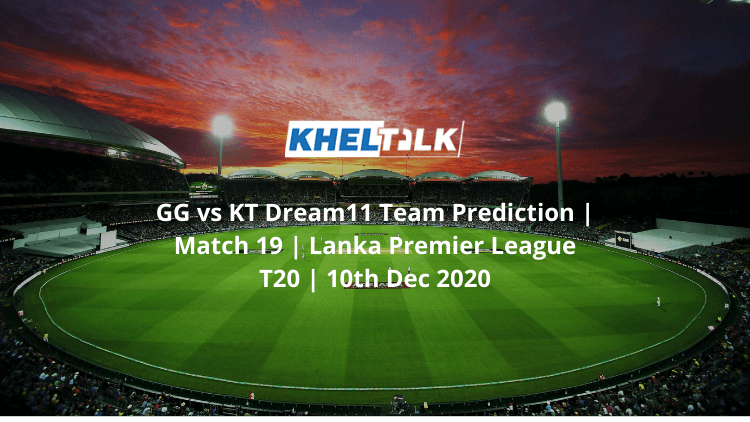 Bottom-ranked team Galle Gladiators and Kandy Tuskers will not lock horns in the next fixture of the Lanka Premier League. Both the teams have struggled to make an impact in the tournament so far. With just one win from six games, Gladiators and Tuskers have been oppressed at the fourth and fifth spots respectively at the points table.  So, let’s go through our Dream11 Team Prediction for the upcoming Lanka Premier League game between GG vs KT.

With time, the pitch has started to get slower. Batsmen must take time on the crease so that they can pull off later in the game.

Gunathilaka has been outstanding with the bat as he has smashed 322 runs in just 6 innings at an average of 64.40 with the highest score of 82. He has 44 fours and four sixes to his name.

K Mendis has got maximum runs for Tuskers. Having scored 193 runs from 6 innings at an average of 38.60. He can be relied upon. He has smashed 12 fours and 13 sixes so far in the tournament.

Gunaratne is the best choice as captain as well. Scored 104 runs off the bat, along with chipping seven wickets, this makes him the X-factor player of the team. Don’t miss him out.

Pakistan Legend pacer M Amir seem to be in superb form and has contously trouble batsmen in the tournament. So far, he has seven wickets to his name at an economy of 8.72.

GG vs KT Dream11 Prediction: Who will win the match

Gladiator will be making plans on how to remain on the winning streak. Tuskers seem to have lost all the hopes and Gladiator will take this as an advantage. So, our Dream11 Team Prediction experts bet on Galle Gladiators to notch a victory here.